Hotel on the Corner of Bitter and Sweet by Jamie Ford 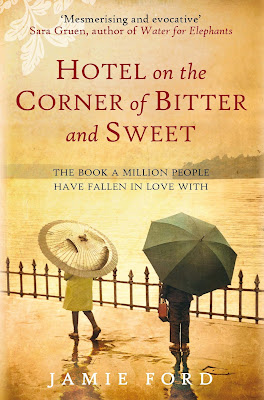 The old Seattle landmark has been boarded up for decades, but now the new owner has made a startling discovery in the basement: personal belongings stored away by Japanese families sent to interment camps during the Second World War. Among the fascinated crowd gathering outside the hotel, stands Henry Lee, and, as the owner unfurls a distinctive parasol, he is flooded by memories of his childhood. He wonders if by some miracle, in amongst the boxes of dusty treasures, lies a link to the Okabe family, and the girl he lost his young heart to, so many years ago.

Now and again a book comes along that you want to get the world to read.  Because the story is just that good.  And you wouldn't have known about it had it not been because of word of mouth.

When Allison and Busby sent me a copy, after I saw Dove Grey Reader's write up about Hotel on the Corner of Bitter and Sweet, I read the opening chapter.  And knew that this was not a book to read in public.  I am a giant old weepy girl when it comes to some books and I just knew this book would touch my heart strings.

Jamie Ford's writing is uncluttered.  It's not particularly flowery and he doesn't really faff around very much with being purposefully poignant about things.  Instead, his writing has a great honesty to it and his characters glow richly because of it.

It is 1986.  The novel starts with the recently widowed Henry Lee is walking past the Panama Hotel in Seattle.  It was once the gateway to  Japantown but now it was a crumbling relic of another world.   A crowd is gathered there and as Henry looks on, the belongings of Japanese familes, left when they were rounded up and sent to internment camps during WWII, are brougth out.  The owner leans in and picks up a bundle and when he opens it up, it is a beautifully decorated Japanese parasol.

The visual imagery of this scene is so strong I had to swallow a lump in my throat.  You really feel drawn to Henry.  You want to know what these items mean to him and what stories these items had left to tell this very modern world.

We are transported with Henry Lee, back to 1940's Seattle, at the height of the war.  Henry lives there with his parents, Chinese immigrants to the US.  Henry is a bright, sensitive boy who has to make do with a scholarship to the local school, Rainier Elementary, where he is verbally abused and picked on because he is Chinese. His parents do not want him to go to the school in their own neighbourhood, they want him to be American and ask him to speak English at home, even if they can't understand it themselves.

Whilst at school he comes to meet Keiko Okabe, a Japanese American girl.  In the eyes of their schoolmates Keiko and Henry are the same - they have black hair, they look Asian.  None of them seem to realise that these two young people are very different, being Chinese and Japanese respetively.  The world saw them as not belonging.

It is during this time of awful awful suspicions, where FBI raids are more and more common, curfews are in place and blackouts are mandatory, that these two young people find strenght and courage within each other and an innocent love that will see them through some dire times ahead.  Especially when Keiko and her family are taken with other Japanese during the evacuations and sent to internment camps.  Henry and Keiko cling to the promises they made one another, and it is now, forty years later, when Henry watches that parasol unfold that past and present mingle.

In the basement of the hotel, amongs the items still left undiscovered, Henry's search is not just to find items from the girl he'd lost, but also for a way to come to terms with what he had been a witness to, all those years ago.  He tries to make sense of his very modern Chinese American son and the reasons why his own father, a nationalist, acted the way he did, treating his son (Henry) the way he did and the awful consequences of his actions.  Henry is searching for himself, for something invaluable.

Jamie Ford writes a story within a story, almost a fairytale, and in Henry he creates a wonderful character who reminded me of someone who keeps being surprised by the harsh realities of the real world.

I never knew about the Japanese internment camps in the States and it shocked me deeply.  But it is the understated fashion Mr. Ford tells Keiko and Henry's story, that gives it the impact and the pathos.  Yes, it is deeply sad at times but it also is uplifting and gently humourous in places.  It proves that human spirit can keep growing in the most awful of circumstances and I loved it.

It's a wonderful, thoughtful novel without pretensions.  The strenght of the characters and the gripping storyline marry seamlessly, as does the writer's ability to showcase Seattle in the "then" and "now".

The Hotel on the Corner of Bitter and Sweet surprised me - rich in dialogue, peopled with great characters and rooted firmly in the best of American traditions, family, honesty and friendship the book is a feast.  It's taken a while to get to the UK but the good folks at Allison & Busby definitely have a winner on  their hands.

Find Jamie Ford's website here, with Allison & Busby's site here.
Who wrote this? Liz at 8:12 am

Wow this book sounds amazing. I'll definitely be checking it out.

That part about word of mouth? Spot on. I don't know how many people I've convinced to read this book since late January, but it's more than a handful. I won't stop boosting this book until I'm dead.

I have to say I love how diverse the range of books you review on MFB are. Although I am totally a YA fanatic it is interesting to here about other books. Thank you