The Brides of Rollrock Island by Margo Lanagan 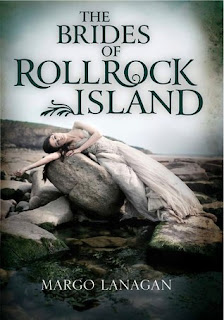 Synopsis
Rollrock island is a lonely rock of gulls and waves, blunt fishermen and their homely wives. Life is hard for the families who must wring a poor living from the stormy seas. But Rollrock is also a place of magic - the scary, salty-real sort of magic that changes lives forever. Down on the windswept beach, where the seals lie in herds, the outcast sea witch Misskaella casts her spells - and brings forth girls from the sea - girls with long, pale limbs and faces of haunting innocence and loveliness - the most enchantingly lovely girls the fishermen of Rollrock have ever seen.

But magic always has its price. A fisherman may have and hold a sea bride, and tell himself that he is her master. But from his first look into those wide, questioning, liquid eyes, he will be just as transformed as she is. He will be equally ensnared. And in the end the witch will always have her payment.
From the first few pages I knew this was a very special book. We meet the witch at the end of her years and see her through the eyes of children. Before long we are transported back to the witch's childhood when she was just Misskaella, smallest of a large family. As she grows it becomes obvious that she's not the same as the rest; she has an affinity for the seals and they for her. As she gets older her gift becomes more pronounced and she can see the life in things, lights that flicker around the edge of her vision which are totally distracting. The oldest in the community of Rollrock know what she is but the rest just know that she's different and treat her as an outcast. Such treatment, even from her own mother, gradually makes Misskaella bitter.
What happens next is like a lesson in how not to treat people. Once she discovers that she's different and that the community have decided that she's to be avoided then Misskaella becomes a loner. Her talent is something that she uses to get her revenge on the island of Rollrock. The wonderful thing about Margo Lanagan's beautiful writing is that the whole time I read Misskaella's chapter I was with her and totally empathetic. For the rest of the book we see her through everyone else's eyes and my loyalty waned. With each chapter I completely agreed with the narrator - I'm either very fickle or this is powerful writing. I'm going with the latter!
This story is somewhat circular (not entirely but bear with me) as it starts in the just before present, rewinds and then we follow the tale back to the present day following different narrators. Not once did I feel the loss of the narrator before as the new one gathers you up, you hook your arm over theirs and they show you the same places, the same people through their eyes. Generations pass and things change on Rollrock. I reread earlier parts of the book before continuing as we meet someone's son or someone's granddaughter and I wanted to revisit the older relative, glimpsed in an earlier chapter. Because the island is so small I felt as if I knew them all and I felt sad and a little in awe of what the island had come to and what Misskaella had achieved.

This book is magic from the first page to the last. Just when I thought I'd definitely turned my back on Misskaella something happens to make me change my mind. I was completely bewitched by this book. The night I finished it I dreamt of selkies all night long and woke up wishing I could read it again for the first time.
Who wrote this? Essjay at 7:30 am

I echo what Jenni said! Thanks for the review.

sound is so nice