This is not a review for Hounded by Kevin Hearne 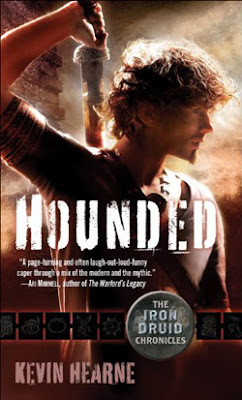 It is quite by accident that I decided to pick up my copy of Hounded by Kevin Hearn (purchased last year from Forbidden Planet before my book buying embargo) to read on the same day Orbit UK announced that they had bought the Iron Druid trilogy for the UK. Sometimes serendipity freaks me out a little.

This is the note from Orbit's site, written by Anne Clarke:

The Iron Druid trilogy by Kevin Hearne is set in Arizona and introduces us to Atticus O’Sullivan. He’s a rare book salesman, herb peddler, and 2,000 year old druid – the last of his kind – who has been on the run for over two millennia from a very angry ancient Celtic god. The books are set in the modern day world, where gods, myths, and magic are very much alive. The first book HOUNDED primarily features the many Celtic gods; HEXED will focus on Coyote and the Bacchants; HAMMERED will be about a plot against Thor. (Everybody hates Thor.)

Kevin Hearne was also excited about the deal, saying: ‘I’m thrilled to be with Orbit UK and hope people will enjoy this blend of history and legend dropped into the modern world. The rich mythology of the Irish is endlessly fascinating to me, and an allusion to British lore in HOUNDED will eventually become important later in the series as Atticus finds himself in trouble near Windsor Castle.’

I first read the manuscript for HOUNDED in 2009 but it was before I moved to Orbit, and although I loved the story, I couldn’t see a way to make it work on my list back then (I was mainly publishing crime thrillers). When I heard the Iron Druid series was still looking for a UK home I couldn’t believe my luck, and I’m delighted to be bringing Atticus to the UK after all. And since we’re publishing these books this September, October and November, I don’t have long to wait to share them with everyone else here too. You’re in for a treat!

I know some readers will look at the US cover and think: pretty boy, sexy time romance, not so good writing, derivative blah blah.

Witness my snort of derision: SNORTLE

Hounded is excellent. Atticus is a strong and deeply funny main character. He has the boy-bits to carry off a whole six book series, if not more. The setting is modern and the author has kept our 2000 year old main character very fresh and very real. Atticus does not posture - there are no thees and thous and he is a pretty cool guy. Also, basically, Atticus does not need to posture. He is badass but he's not arrogant about it. It does him credit as I would have flung the book across the room at the slightest bit of "I am so fabulous and so powerful, look at me I've lived 2000 years or more". Instead he acknowledges his weaknesses and the fact that although he is exceedingly long-lived, there is a chance that he could end up on his back with his head severed with a bad case of deadness.

Hounded reminded me of Jim Butcher. There will be a lot of comparisons to Jim/Harry but really, Atticus stands superbly out from the crowd for several reasons. Mostly it is because of the amount of research that Mr. Hearne must have done for this series. He weaves old Celtic lore competently into modern day Tempe, Arizona's arid landscape and has given Atticus a great sense of time and place. Atticus is also wonderfully pragmatic and goes to great lengths to stay under the supernatural radar and not make waves. But when he is called upon to do so, he stands firmly to defend his patch. Sometimes you get the idea that a writer is so fully immersed in his story telling that by sheer power of that storytelling he compels the reader along. I felt that with Hounded whilst reading it. I could not put it down and wanted to read it cover to cover as soon as I had finished reading it. I did not want to let go of Atticus or his crazy dog Oberon, whom I've come to love quite a bit.

Instead of comparing it to: The Dresden Files by Jim Butcher, or The Felix Castor books by Mike Carey or the Matthew Swift novels by Kate Griffin or the books chronicling Peter Grant's adventures in London by Ben Aaronovitch, or Suzanne McLeod's very excellent Spellcracker books, or Mike Shevdon's sublimely dark The Courts of the Feyre books, watch this very adept author called Kevin Hearne step up to the plate and take his place beside these excellent authors of adult urban fantasy, because he deserves it.

If these books aren't on your radar, they should be. Look past the covers that may not be everyone's choice, put the "we've seen it before" attitude in your pocket and give them a whirl. You may be very pleasantly surprised.

Orbit will be releasing the Iron Druid books in rapid succession for maximum devouring later this year - September, October and November.

This blogpost was brought to you by the Atticus O'Sullivan Fan Club - Chairperson: Liz de Jager

Love your review! Can I be the secretary of the club? I think we might rope Stefan from Civilian Reader in to be the treasurer :D

P.S. the captcha for my comment is sqauwk... How appropriate!

Fantastic news. I added these to my school wish-list because it is Druids YAY
Thanks :D

Love these books! I'd join the fan club!

Thanks for the shout out, Liz! I've got Hounded on my TBR! Looking forward to reading it :-D

I read Hounded this week and I agree with everything you say here, Liz. It's the best fun I've had reading a book for years! This series is going to be wonderful!