Mark and I were really lucky to be able to attend this brand new event hosted by Transworld, in partnership with Sir Terry Pratchett.

The award / prize took place at Waterstone's Piccadilly.  The shortlisted titles were:

•Half Sick of Shadows, David Logan

•The Coven at Callington, Shereen Vedam

Mark and I met up with Geeksyndicate 's Dave Monteith (soon to be dad for the first time!), Rob and Sophia who do the booky side of things on the Sci Fi Film Festival that takes place in London, as well as Mark and Rob from Forbidden Planet. There was a great deal of chat and speculation as to who won.  Caroline from Portrait of a Woman attended too and she confidentially told me that she has a big favourite but refused to say who it was.

Sir Terry Pratchett and the rest of the judges eventually turned up and Sir T looked as dashing as ever.  Tony Robinson was in attendance as well but had to shoot off to catch a flight somewhere exotic.

Not all of those shortlisted could make it, but some had sent representatives on their behalf. The shortlist was read off and each person came up to shake hands and accept their certificate, goody bag and champagne.

Then came the big announcement.  Who the winners were: (and it threw us all) the judges had decided that the prize was to be shared between two people. 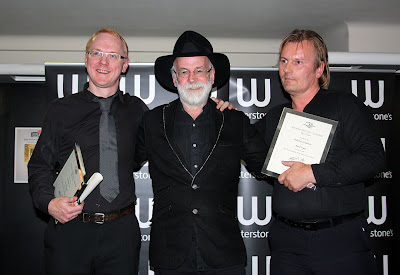 I stood in the front, snapping away with my iphone, but I had tears streaming down my face as these guys' dreams had literally come true right in front of the gathered crowd of strangers, friends and family.  It was incredible.

Brief speeches of thanks and congratulations were made and then everyone sort of dispersed around the room to twitter about it and to talk books and geeky things.

It was a lovely evening and I think everyone had a great time.  Mark and I stepped over to chat to one of the short-listed people, David Beynon who had travelled from Canada to visit family and also attend the award ceremony at the same time.  What a great guy - he was so positive about being shortlisted, even if he did not walk away with the "prize".  He mentioned that he had subsequently been approached by various agents for representation and that there has been a lot of interest in his work.  This was fantastic news and I just wanted to squish him.  We told them about cool places to go and they asked us where they could see a real life Tardis.  We failed at helping them in that respect and I think our standing plummeted a bit.

We let Mr. Beynon and his family be and shuffled off to talk to other people like the media professionals we are.

Thanks to the always fabulous Lynsey for inviting us to attend and to Transworld for being so courageous in hosting an event like this.


The official PR bit from Transworld:
Sir Terry Pratchett and Transworld Publishers launched a new award for aspiring debut novelists in June last year, the Terry Pratchett Anywhere But Here, Anywhen But Now Prize. After the deadline for submissions of 31 December 2010, 500-plus entries were received for the £20,000 prize.


The six judges (including Sir Terry Pratchett and Tony Robinson) met yesterday at Waterstone’s flagship store in London’s Piccadilly to thrash out a winner. After hours of debate the conclusion was reached that it was impossible to select a single victor! The entries were so diverse that it was unanimously decided to split the prize and award it to David Logan for his book HALF SICK OF SHADOWS, and to Michael Logan (no relation!) for APOCALYPSE COW. Both writers will receive a publishing contract from Transworld.

‘It was a long deliberation and although to some it might seem a cop out to split a prize, we decided that since the existence of the prize was to find new talent then this was the happiest decision to make. Half Sick of Shadows and Apocalypse Cow both stood out in their different ways and I wish their creators the best of luck in their writing careers.’

Half Sick of Shadows is a darkly atmospheric, richly written coming-of-age novel in the spirit of Ian Banks’ The Wasp Factory. David Logan, who lives in Carrickfergus, N. Ireland, commented:

“I am disappointed for the runners up. The difference between winning and losing is a hair’s breadth. I just feel very lucky.”

Apocalypse Cow follows the story of a group of social misfits thrown together after an experimental bio-weapon is accidentally unleashed by the government, with peculiar repercussions for Britain’s farm animals. The Scots-born but Kenya-based Michael Logan commented:

“Ever since I wrote my first short story at the age of eight, it has been my dream to become an author - although the idea for a novel about sex-crazed zombie cows did come a little later. The full impact of attaining a lifelong goal has yet to fully sink in. I'm sure it will hit me on the way home, when I will bemuse all around me by performing a victorious knee-slide across the concourse at Gatwick.”

Sir Terry Pratchett and Transworld Publishers would like to thank everyone who submitted an entry to the prize.

The winners, chosen from a shortlist of six, were announced at the 5th View champagne bar last night at 7pm.
Who wrote this? Liz at 9:37 am

Your standing plummeted not at all. It was a lovely evening and thanks so much for the kind words.

We were actually able to locate a Police Call Post (the skinnier cousin of The Doctor's Police Call Box) just down the street at Piccadilly Circus.

No Matt Smith, though...