The Mermaid's Mirror by LK Madigan 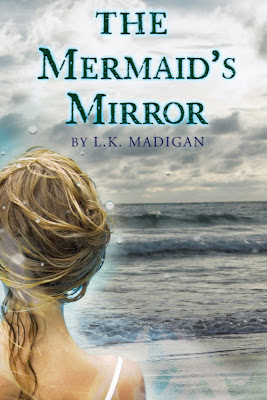 Lena has lived her whole life near the beach – walking for miles up and down the shore and breathing the salty air, swimming in the cold water, and watching the surfers rule the waves – the problem is, she’s spent her whole life just watching.

As her sixteenth birthday approaches, Lena vows she will no longer watch from the sand: she will learn to surf.

But her father – a former surfer himself – refuses to allow her to take lessons. After a near drowning in his past, he can’t bear to let Lena take up the risky sport.

Yet something lures Lena to the water … an ancient, powerful magic. One morning Lena catches sight of this magic: a beautiful woman – with a silvery tail.

Nothing will keep Lena from seeking the mermaid, not even the dangerous waves at Magic Crescent Cove.

I have to thank Amanda from Floor To Ceiling Books for buying me a copy of The Mermaid's Mirror last weekend. I have been eyeing it for ages and of course knew about LK Madigan's very sad passing. I also knew about TMM's magic, having read people's reaction about the book online. What I did not expect is to fall for it as hard as I had.

When aspiring authors ask agents and publishers what exactly it is that they look for when picking up an unsolicited manuscript the answer is invariable "voice". People do not know how to describe this mysterious "voice" except to say that "we know it when we see it". Personally, for me there are a handful of novels whose "voice" stand out - books by Kirsten Cashore drips with voice, Sherman Alexie's writing is all "voice", Diana Wynne Jones and Eva Ibbotson shiver with "voice". The Mermaid's Mirror by LK Madigan is "voice".

The writing style is unaffected, uncomplicated and at times a bit dreamy to keep pace with Lena's emotions.

Lena is a great character - close to her parents and her little brother Cole. She is loyal to her friends and a bit in love with her boyfriend Kai. On the surface Lena is a girl who lives a happy complete life. We see her as a nice girl. What we are shown by LK Madigan's superb writing is a girl who is slowly losing her grip on reality. She has started sleepwalking. Often waking up on the beach, not remembering how she got there. Lena finds herself staring out at the sea often. She wakes up in the lounge, with her mother talking to her, in the small hours of the morning, humming some unknown song. Lena also finds herself constantly looking for something. It is a yearning she does can't place. She feels like she's going a bit crazy. Her parents are worried about her, it creates a tension in their small family they aren't entirely sure how to handle.

Kai, her best friend and now boyfriend explains her sleepwalking by saying that she is clearly so keen to learn how to surf, that it is working on her, keeping her awake. It actually makes sense and both Lena and Pem (her other best friend) reluctantly agree. Lena's dad does not want her to learn to surf. He had an almost fatal surfing accident just before her birth, and has not been in the sea since. Before this incident, he had been one of the best surfers in the area. And he is refusing to allow Lena to learn how to surf.

As the story unfolds in this wonderfully windswept and sea-spray way, and we learn the secret Lena's parents have kept from her and the choices she has to make, our hearts yearn that she makes the right choice.

I fell hard for this book. It is beautifully written and Lena is such a great character to spend time with. As a reader I wanted everything to work out perfectly for everyone. I loved the setting and think Ms. Madigan did an amazing job creating a very visual, very real-feeling world inhabited by both the mysterious and mundane.

I would highly recommend reading The Mermaid's Mirror for the sheer beauty of the prose and the characterisation of Lena. To say anything more would be superfluous.

Happy reading, MFB friends!
Who wrote this? Liz at 8:24 am

Well you have sold it to me. You make it sound so beautiful. It is so sad to read that she passed away. Definitely going on my list.

Wow, I wasn't that bothered about reading this one until I read your review! thank you, I shall have to look into getting it!

Dear Liz,
thank you for your insightful review and kind words. Lisa had plans for books 2 and 3. There are post-it notes with story ideas, chapter titles, and research materials. She loved the process of writing.
In addition to TMM and Flash Burnout, there are two completed manuscripts (currently with no contract to publish) that are companions to FB. Only time will tell their fate.
Sincerely,
Neil Wolfson
Portland, Or.

As I read Neil comment - I must say I have tears. I have had these books on my wish-list for ages.
Beautiful review. I intead to get this particular book as soon as it is out in the UK lets hope the other books get deals too <3

Wow, I badly want to read this one - I absolutely adored Flash Burnout. And especially after reading Neil's comment, I feel all the more sad for this terrible loss :(