The blogpost in which Josephine Angelini does NOT talk about her favourite books!

So, we asked Josephine Angelini to tell us a little about her favourite books. I didn't expect what we got back but it sure is funny! Thank you Josephine - you really made me giggle. 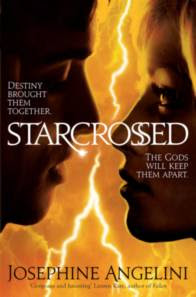 I’ve been dreading writing this post. I’ve put it off for days, hoping in vain that the next time I look at the title it will have changed to something else. Like “Favorite Board Games When You Were A Child” or something like that. Mousetrap and Operation, in case you were wondering. I also would have liked Checkers, but my sister Louise would pinch me if I didn’t let her win so that ruined that game for me. I ended up hating playing Checkers because I really wanted to win just once, but Weezie pinched hard.

But this blog isn’t about “Favorite Board Games”. I look at the title, and there it is… staring at me. Not changing. “My Favorite Books” (cue ominous music).

See, I don’t have a favorite book. I don’t have a favorite writer. I have TONS of favorite books and favorite writers. But listing them is like walking into a trap. Think about it. You’re a writer and you meet lots of other writers—imagine you’re a big party where you’re all hanging out, mingling. Now imagine running into a writer who listed everyone in the room as one of her favorites, except for you. Awkward.

Now flip it. You’re the one shaking the hand of a writer who you accidentally left off a list of favorites. You look around the room and realize that you mentioned everyone else but this one person. This goes beyond awkward. This is “Seinfeld” level of uncomfortable.

In fact, I think there must be an episode about this. I couldn’t say for sure because I missed out on “Seinfeld”. For years, starting when I was about 15, I worked too many jobs to watch TV. I’ve also only seen a handful of episodes of Friends. The only character name I know is Rachel, and only because of the haircut. I watched “Buffy the Vampire Slayer” when I could, but later, and mostly in re-runs. I love “Buffy”. The original movie is pretty awesome, too.

*sigh* I guess I just have to bite the bullet, right? I have to give you a few books titles or I just won’t be fulfilling my end of the bargain. The only safe thing to do is list dead people. I certain I won’t run into any of them at a big party, at least for several more decades. But then, what about after I die? Hum.

Could you image listing everyone but Chaucer, and then you die and go to a ghost party with all the greats—Shakespeare, Austin, The Bronte sisters, Homer, and the like. They’re all on your list. And there, over by the wet bar is Chaucer. Just glaring at you. What do you say? Do you suck it up, go over, and start with, “’The Canterbury Tales’ really was super badass and I can’t believe I didn’t list it” or do you avoid him all night? This is just “Seinfeld” with ghosts. Maybe there’s a supernatural YA book in that…

LOL and we STILL don't know the answer!

Thankyou for not enlightening us Josephine. However, as we think your fabulous, we will let you off.

This was hilarious! Very fun read on a boring Monday! :-) Thanks for sharing!

Jessi @ Reading in the Corner

*Snork* Now THAT is how you avoid an awkward question.

That has got to be the best avoidance post EVER. I love the way Josephine writes