Secret History of the Pink Carnation by Lauren Willig 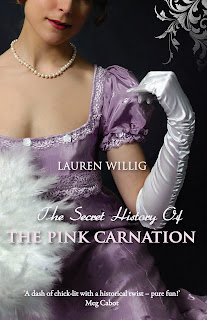 Nothing goes right for Eloise. The one day she wears her new suede boots, it rains cats and dogs. When the tube stops short, she’s always the one thrown into some stranger’s lap. Plus, she’s had more than her share of misfortune in the way of love. In fact, after she realises romantic heroes are a thing of the past, she decides it’s time for a fresh start.

Eloise is also determined to finish her dissertation on that dashing pair of spies, the Scarlet Pimpernel and the Purple Gentian. But what she discovers is something the finest historians have missed: the secret history of the Pink Carnation – the most elusive spy of all time. As she works to unmask this obscure spy, Eloise stumbles across answers to all kinds of questions.

How did the Pink Carnation save England from Napoleon? What became of the Scarlet Pimpernel and the Purple Gentian? And will Eloise Kelly escape her bad luck and find a living breathing hero of her own?

Meeting Eloise right at the beginning of the book you have immediate empathy for her - stuck in a overcrowded tube on her way to interview one of the descendants of Richard Selwick, a suspected spy during the Napoleonic wars, she is not in her element and ends up damp and flustered, but determined to make headway for her dissertation, on the doorstep of a lovely home in Kensington.

The descendant - Mrs. Arabella Selwick-Alderly - listens to Eloise's story and decides to let her have access to a some letters and journals dating back to that time. And so Eloise's story seamlessly segues into the story of Amy, her cousin Jane and the Secret History of the Pink Carnation.

The book has so much going for it - an engaging main character, funny snappy dialogue, interesting locales, handsome rogues and Napoleon's court vividly portrayed.

The story is told in parallel time-lines with the majority of the novel focusing on young Amy's adventures in France. She reminded me very strongly of heroines from Georgette Heyer's books - sweet, a bit innocent and impossible not to like. Her biggest dream is to become part of the League of the Purple Gentian, a spying ring who has taken over from the Scarlet Pimpernel to help rescue nobles from the jaws of the guillotine and to liberate valuable information from Napoleon to give the English a head-start.

What makes her life very difficult is her acquaintance with the handsome Lord Richard Selwick. He exasperates her, he is quite blatant in his career choice as a scholar actually working for Napoleon, looking after the Egytpian antiquities taken during the campaign in North Africa. Amy cannot wrap her mind around the fact that an Englishman could betray his country in this fashion, working for the enemy - admittedly not fighting other English but standing aside and letting them die at the hands of the French!

Naturally, there is much more to the story than this and the author expertly strings us along a deceptively simple plot until she decides to pull the rug from underneath our feet.

One aspect which I would like to have seen more of, is Eloise and her budding friendship and relations with the Selwick family. They are an odd bunch and I suspect the author will be able to plow their peculiarities to good effect in her other forthcoming novels.

I really enjoyed this first instalment from Lauren Willig. It is a historical romp with bite - so if you are a fan of Julia Quick, Georgette Heyer, Alexander Dumas (pere), Anthony Hope's Prisoner of Zenda or any of the Captain Alatriste novels by Arturo Perez Reverte, but you wanted some female swashbuckling, this is totally up your street.

The writing is light, witty and packs a surprisingly solid punch. It put me in mind of really laying the foundations for a rollicking series of adventures and I am really looking forward to the next instalment(s).

The Secret of the Pink Carnation by Lauren Willig has just been published by Allison and Busby here in the UK. Make sure you pick up a copy - the demure cover hides a multitude of fun!
Who wrote this? Liz at 8:43 am

Great review!
I bought this in the sales bin at the bookstore, but I haven't read it yet. I think it's even the first review of it I read! I'm glad you enjoyed it; I'll probably put it a little higher on my TBR pile.

I love this series! They are such fun books with great characters and I have loved seeing Eloise develop in addition to all of the individual couples featured throughout the series. Hope you continue to read!