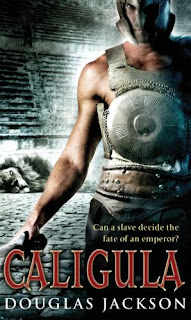 Gaius Julius Caesar Augustus Germanicus, the third Roman Emperor, is better known by another name: Caligula, a name synonymous with decadence, cruelty and madness. His reign was marked by excess, huge building projects, the largest gladiatorial battles Rome was ever to see – men and animals killed in their hundreds – conspiracies, assassination attempts and sexual scandal.

Rufus as a young slave grows up far from the corruption of the imperial court. His master is a trainer of animals for the gladiatorial arena. Rufus discovers that he has a natural ability with animals, a talent for controlling and schooling them. It is at the arenas that Rufus meets his great friend Cupido, one of Rome’s greatest gladiators.

It is his growing reputation as an animal trainer and his friendship with Cupido that attracts the cruel gaze of the Emperor. Caligula wants a keeper for the imperial elephant and Rufus is bought from his master and taken to the imperial palace. Life here is dictated by Caligula’s ever shifting moods. Caligula is as generous as he is cruel, he is a megalomaniac who declares himself a living god and simultaneously lives in constant fear of the plots against his life. But his paranoia is not misplaced, intrigue permeates his court, and Rufus and Cupido find themselves unwittingly placed at the centre of a conspiracy to assassinate the Emperor.

Douglas Jackson's done a fine job of bringing a slice of Roman history to life in Caligula, but more than that, he's created characters who really are right at home in the first century AD, unsullied by modern perceptions or persuasions. The world they live in is dangerous and cruel, even more so for Rufus as he is drawn into Caligula's orbit and the seething nest of intrigue that lies within the walls of the palace.

As regards the Caligula, the opening chapter featuring the emperor as a boy is wonderful- there, in one broad stroke, the core of his entire character is laid bare and the scene set for the macabre and terrifying highlights of his mercifully brief reign.

It's very cinematic, with fast and deadly action playing out against the grand backdrop of the imperial palace and the blood drenched sands of the arena.

Before you know it, you're immersed you in Rufus' world, where the ever present undercurrent of Caligula's mood swings brings pervasive sense of paranoia to each scene. It's testament to Douglas' abilities that, even though you might know what the ultimate fate of Caligula is, you're never sure of the who, how, why or who until it happens.

It's a great, balanced story that demands to be read, and should be.
Who wrote this? Mark at 12:00 pm

Excellent! I love historical fiction, especially those based in Rome! This is something I'll definitely have to pick up.