The Devil's Ladder by Graham Joyce 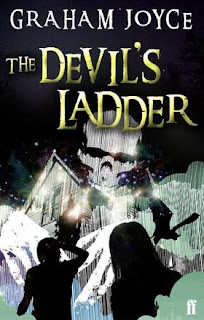 Sophie and James have nothing in common. How could they? She's from rough Abbey South School and he's your typical Castle Gate posh geek. But when you are two of the few people who can see demons, you need all the friends you can get. For they are being hunted, plagued by weird messages that only they can read: The Time Has Come.

And so it has. For in order to destroy the gathering forces of evil, Sophie and James will have to climb, one rung at a time, The Devil's Ladder

Graham Joyce is an author of renown and I loved his previous offerings. I therefore nabbed The Devil's Ladder when it came in last week.

A lot happens in this slender volume. It is an actioner, a thriller with more than a hint of the supernatural and it is also about making unexpected friends.

If there is one criticism, it would be that I would have liked the book to be bigger, with more pages to read. The story is solid and the characters are interesting and well thought out. But, I wanted more and I hope that maybe, we get to have more adventures with James and Sophie, (nudges Graham Joyce) as they have been set up really well for more supernatural shenanigans.

Sophie has seen James the Geek practically every day walking to school but she doesn't really know who he is. She knows he reads a lot - he never lifts his nose from whatever book he's reading and he's also a target for some bullies and gets beaten up regularly. Sophie appears to be a regular girl, on the cusp of noticing boys, whereas her friends seem to be focused on nothing else.

On her way to school the one morning, she sees the words THE TIME HAS COME painted on a wall. The words echo one of the many weird dreams she suffers from. Just then James walks into her and the book he's reading has exactly the same title. More than just a bit freaked out she sees herself off to school, determined to speak to James after school to ask him if he saw the writing on the wall and to check what the book was he was reading.

A very reluctant James reveals that he too saw the writing on the wall. And that he too sees odd things at times and dreams even stranger things. He introduces Sophie to Mrs. Royston who seems to know a bit more about what and who they are. Mrs. Royston turns out to be an elderly lady with a fierce way about her, three dogs and a wealth of personal history, chief amongst which is the fact that she used to be an anthropologist. With her help, James and Sophie uncover the mystery of Ravendale, an old dilapidated house which they pass on their way to school almost every day.

Saying more about the happenings in The Devil's Ladder would be giving away the actual story and it is such a fun read, I would recommend you get your paws on a copy to read it for yourself. It is aimed at years 12+ and has an element of - how can I put it? - lingering terror that is actually a bit unsettling.

Mr. Joyce's writing is snappy and the dialogue between Sophie and James reflects how their friendship evolves throughout the story. There is still that hesitancy in some instances which rings true and calls for a few wide grins as you read it.

I'd recommend The Devil's Ladder to both girls and boys - it will hold the attention and thrill in equal measure. Both characters get a good amount of "screen" time and they are both nice enough for you to develop empathy for them. Sophie's family life is highly amusing, with her dad coming across as a giant tease and a bit...well, unhinged. Things aren't quite the same for James so when you find out about his home life it's more than just a bit sad.

As I mentioned earlier, the ending is solid and you are left with this teasing idea that there may be more adventures to be had. I thoroughly enjoyed reading The Devil's Ladder and liked the characters a lot and hope that you will too!