Girl from Mars by Julie Cohen 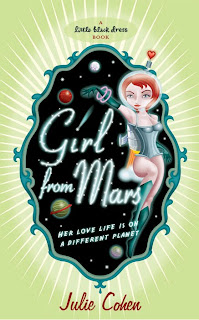 I, Philomena Desdemona Brown, do solemnly swear to forsake all romantic relationships... It's not like the vow, made by Fil and her three nerdy male best friends, seemed much of a big deal at the time. Frankly, Fil wouldn't know romance if it hit her in the face, and with her real love being her artist job at Girl from Mars, the comic whose heroine has never had a love interest, she doesn't exactly mind being relationship-free anyway. Until her world is rocked to its core when one of her long-standing quartet and Girl from Mars herself both unexpectedly fall in love. Is it time to give in to temptation and finally fall in love?

There is so much to love about this little book from Little Black Dress, a Headline imprint. Firstly, the cover is 100% made out of win - it's quirky, it's fun and utterly encapsulates the coolness of the actual story. Secondly, Julie Cohen's writing is a doddle to read (nom nom nom, burp) and thirdly, Fil, the main character is so genuine, you can't help but relate to her. Oh, and lastly, but very much the not the least, our hero does sound fantastically damaged and lovely, always a good recipe!

Fil is a geek. She's weird, her haircolour changes from platinum blond to purple, pink and blue, when she is in the mood for a change, she hangs around with her three best friends, all male, and she can geek about Star Trek, Battlestar Galactica and numerous other shows with the best of fanboys out there and she also happens to be a comicbook artist, working almost exclusively on Girl from Mars, one of the oldest comics still running since the dawn of time. Well, not really, but it could very well be the case for Fil.

Even though she is a huge comic fan, reading loads and buying loads, her one true love is Girl from Mars and she is incredibly passionate and loyal to GfM. To the extent where she faces off against her boss at the company, when it transpires that the original creator of GfM's grandson has decided to write a script for GfM. Not bad, you would personally think, but it turns out that he's written in a romance for GfM. And Fil is adamant that this is not the way things ought to be done - GfM never falls in love, admittedly she is super sexy and cool and the boys love her, but she never falls in love. She is above that.

Dan, the new blood, has a difficult task coping with Fil. She's opinionated and goes in swinging when she is let loose to meet him and confront him with his rubbish script for GfM. Fil points him to the archives, explaining to him how intense people were about backstory when it comes to favourite comic book characters and if he was going to pull his weight, he had better start stocking up on his knowledge about GfM.

Slowly but surely Fil and Dan become a team. This however means that Fil's relationship with her mates become even more tentative. There is Digger, a large bearded man who is frightening in appearance but a softie at heart and Jim, slightly neurotic and deeply sweet where Fil is concerned. Jim and Fil have known one another for many years and when they graduated, they bought a house together - strictly as friends. Their relationship is strictly platonic and there is a cameraderie there that is so well written that the author should get a huge thumbs up.

We learn that Fil's parents, highly intellectual literary types (quite frightening) don't take her job seriously and feel that she should apply herself to doing commercial art in order to make decent money. The relationship is amusing and strained.

The romance element is very subtle and very cleverly thought out and woven throughout the storyline. There are no heaving bosoms but there is a lot of stuttering, lies and well, someone leaving the other person at an art installation and legging it for the hills. It is laugh out loud funny in some places and cringeworthy and true in others.

I identified with so many of the characters in GfM - the element of feeling the odd one out in the normal world and the feeling that everyone else got a set of rules to grow up to, but somehow you were left out when those rules were handed out, making you a little bit less socially adept.

I went through a gamut of emotions reading GfM and have to admit that I thought Fil was an excellent character - everything she goes through in the novel is so true that I think everyone, both male and female, should be able to identify with her.

The one thing I regret though is that the cover makes this very much a "girl"-book - especially as it would appeal to both sexes. Fil's world is one of science fiction and fantasy, of comic books like 2000AD and discussions about Star Trek and other popular shows and movies. Guys would enjoy Girl From Mars because it is so firmly set in a world that is so familiar to them - the ploy that Fil is the odd one out in a man's world is fantastically underplayed and therefore makes it even more believable.

I loved, loved, loved Girl from Mars, and I thoroughly enjoyed spending time with Fil, her friends and of course, Dan, who came across as genuinely sweet. If I had to rate it, I would give it a nine - yes, that high, peeps! GfM is definitely highly recommended and has to go into my "best of 2009" reads. And no, it's not just because it mentions my favourite indie shop - Forbidden Planet - either. There is a lot of punch in this light romance novel and what makes it a winner is that its characters - main and secondary - come across so very well. A definite winner and one I'll be talking to everyone I know about for a long time to come.
Find Julie Cohen's website here and the Little Black Dress website here.
Who wrote this? Liz at 8:39 am

i really like this book.i thought it was very witty,charming and definitely interesting.you don't find many characters like Fil Brown and her quirky friends.this book definitely costed many sleepless nights as i couldn't put it down.congrats n kudos to julie cohen!i'm a fan! XD