The Book of Secrets by Chris Roberson 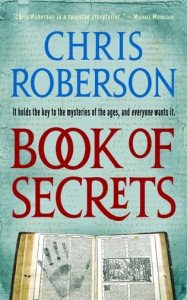 Synopsis
Reporter Spencer Finch is embroiled in the hunt for a missing book, encountering along the way cat burglars and mobsters, hackers and monks. At the same time, he’s trying to make sense of the legacy left him by his late grandfather, a chest of what appear to be magazines from the golden age of pulp fiction, and even earlier.
Following his nose, Finch gradually uncovers a mystery involving a lost Greek play, secret societies, generations of masked vigilantes… and an entire secret history of mankind.
The Book of Secrets is both everything and nothing like you would expect to read in this very traditional thriller genre. On the back of the book is a little tag from Angry Robot which says: File Under: Thriller - Conspiracy, Ancient Mysteries, Pulp Fiction, Blow Your Mind.

And that tiny tag sums it up completely.

The fantastic noir detective thriller story drips with absolutely coolness - Spencer Finch (the name is utterly perfect too) appears to be always struggling just that little bit with what life is throwing at him. He is at times funny, caustic, determined, scared, super intelligent and super stupid.
From the above you can tell that the novel is unlike the standard thrillers that are currently prevalent in the market. It is a thriller written and directed by the Coen Brothers via Quintin Tarantino, to be honest. The watchwords are: expect the unexpected.

We follow Finch as he tries to unravel the mystery of his grandfather's legacy to him. This we read as alternative chapters dotted through the novel and concerned a person called The Black Hand. And in these sections you become aware of the author's fantastic ability to write from various perspectives, playing loose and fast with timelines. In one aside we are introduced to The Black Hand via a short story in the form of a Western, complete with cattle rustling and a ruthless cattle baron looking to expand his empire by exploiting the small folk, there is also a medieval ballad about a young man going to the Crusades and how his perception of right and wrong gets turned on its side. My favourite has to be the pirate story - what can I say? - and the beautiful concise language used.

Then in Real Life Finch is trying to figure out the real story behind a mysterious businessman for the newsgroup he works for. He sets off half-cocked on the tip-off from a mysterious source and things go a bit ... insane.

Part noir part pulp fiction part unlike anything I've read before, Book of Secrets has enough twists and turns to make the Edelweis Road in Austria look like a Roman road. I am hesitant to try and describe the storyline even more for fear of putting in spoilers. What I am quite happy to expose though is that the author has created an immensely enjoyable and readable story which will entertain you to the very last page. Especially fun if you think you've figured it all out .... only to have it all turn out that uhm, hey, you were wrong!

I'd like to add that if you've been a long time reader of this blog, you would know I am passionate about many things, but mainly that I love thrillers and action adventure novels and quest novels and I dislike people messing around with the genre for the heck of it, or if they start doing parodies of them or if they think they can quickly write one to cash in on the coolest thing going that's not about vampires. I was therefore very hesitant about Book of Secrets and thought that it was going to be a bit samey and I had my expectations bundled up and shoved in my face. Very firmly. The book is - wow. I will however say that you have to keep an open mind and read it for its sheer readability because it is more-ish. I read it in two days, i.e. 4 commuter trips.

Find Chris Roberson's website here. This is our first ever Angry Robot review and I have to say, if this was on our Summer Reads List, I would have given it eight out of ten for sheer readability and fun factor!
Who wrote this? Liz at 8:33 am

This book DOES sound totally coolio. I wish I had right now so I could read it for the Mystery Readathon. I will definitely check to see if it's at the library. Thanks!

What a mouth-watering review! Of course I added the book to my list.