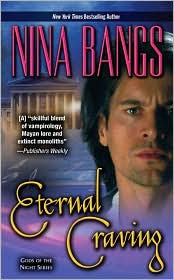 THE ELEVEN – an alliance of ultimate predators. Primal, lethal, irresistible.

THE PROPHECY – an ancient Mayan prediction that the world will end on 12.21.12

THE PREY – where can you hide from pure evil?

LIES. He’s been promised a new life as the hunter he once was. Al soon learns that all the rules have changed. Now he must control his most basic urges – the need to kill, to feed, to mate. And the woman he wants looks at him with both heat and fear in her eyes. Jenna Maloy doesn’t buy the story that he’s come to Philadelphia to save souls. She seems to see through the layers of deception to the primitive heart of him. With her beside him, Al stalks the dark forces that crouch in the city’s night shadows. But the real battle rages in his heart. Love is a formidable opponent. How can he ask her to stay with him after she’s seen the savagery of his beast? He only knows that if she turns from him he’ll be cursed with an eternal craving.

My first step into the realms of otherworld romance has turned out to be the best step I’ve made for a while. Al Edenka is a man with a past: a past of at least 65 million years. Led by Fin, Al and nine others are here to save humanity from Zero and his nine immortal followers. With one immortal banished back from whence he came, the Eleven have another battle on their hands. Though love is getting in the way – or is it lust?

Jenna Maloy turns up on her sister’s doorstep determined to find out more about her quick romance and marriage to the mysterious, yet devastatingly handsome, Ty. Kelly is secretive, to say the least, yet Jenna uses every journalistic skill she has to get to the bottom of things. Very quickly she realises she is out of her depth in a world she only dreamt existed. Her emotions are also spiralling out of control when the gorgeous Al walks into her life. With a mixture of fear and lust, Jenna doesn’t know how to respond to him.

With vampires, werewolves, a Fae King, immortals and dinosaur souls, I was quickly as lost in this world as Jenna, but not with her confusion. I was swept up in the fierce battles Al and the Eleven were embroiled in. I, too, found myself attracted to Al and became jealous when...well, I won’t say in case it spoils it for you.
The most mysterious character is Fin. He just doesn’t seem to fit in with any of the otherworlders. A bit of an oddity, an anachronism too. His fascination with numbers is a little neurotic and not completely explained. With his eyes determining his mood and his penchant for reading minds Fin is one we are sure to learn more about in the next novel.

As this is the second novel in the Gods of the Night series I now need to search out the first, Eternal Pleasure, where I will learn about Kelly’s introduction to Ty and the Eleven. Though I will have read them out of sequence it won’t spoil my pleasure of this author’s work. If, like me, this will be your first step into this unique romance style, you won’t be disappointed.

Eternal Craving is published by Dorchester Publishers and you can find the author, Nina Bangs' website here.

This excellent review has been written for MFB by Sarah Keery whom I met on Twitter as "SeriouslyKooky". She's also gone and set up her own blog so drop by or go and harrass her on Twitter. Hopefully, if I can bribe her with more books, she'll become a regular guest reviewer for MFB.
Who wrote this? Liz at 10:01 am

OOoh go on then - I suppose I might consider it :P x