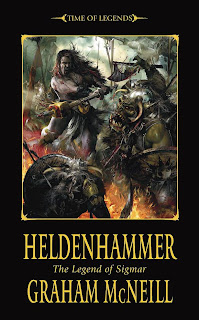 It is a time of legends. The lands of the old World are wild and untamed, where the primitive tribes of men struggle for survival. In this time of peril, by virtue of his valorous deeds, a young man claims leadership of the Unberogen tribe. His name is Sigmar Heldenhammer, and his actions will change history forever. This is the story of how Sigmar rose to power, culminating in the Battle of Black Fire Pass, where men and dwarfs fought against the vast hordes of orcs in their quest to safeguard the future of the Empire.

Heldenhammer is the first of the Sigmar trilogy, a new addition to the Black Library’s Time of Legends series. It tells the tale of Sigmar, the founder and of the Empire of man and starts as Sigmar stands on the threshold of adulthood within his tribe, the Unberogen.

The lands they inhabit, as described by Graham, are severe and dangerous. Mankind’s future hands by a thread under the threat of the constant onslaught of the twisted creatures that lurk within the darkness and the massive forests, an atmosphere Graham flavours each passage with.

The story tracks the earliest days of the legend which Sigmar would forge, when he was no more than the son of a tribal king, fighting for the very survival of his tribe. His path is far from easy; grievous loss and despair will punctuate his journey and see him wavering on the brink of an ignominious death. It’s an approach that allows Graham to build Sigmar into a far more interesting character, and makes the birth of his vision of mankind standing united against chaos a believable and natural extension of his personality.

This vision, which will shape the future and is the central tenet of the trilogy, never seems a foregone conclusion, with the fledgling confederacy facing dire challenges every step of the way. The greatest of these is the momentous battle of Black Fire Pass, the legend of which is threaded so much of Warhammer’s backstory. BFP could never be anything less than epic, and Graham delivers the goods in a dynamic, cinematic style that leaves no doubt why this event shaped so much of the world’s future and makes it a fitting climax to the first segment of a very promising trilogy.

It’s no mean achievement for Graham to have made the story enjoyable to loyal Warhammer fans and an accessible introduction to the setting for casual readers. It's found a permanent home on my bookshelf.

You can read an extract here.