The Comet of Doom by Karen Wallace 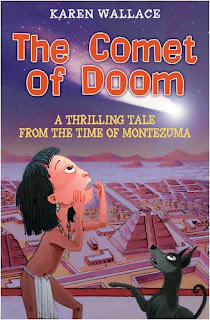 One dawn, a fiery comet appears in teh sky. None of the priests can explain what it means, and King Moctezuma ordes them to be killed. But young Chantico has the gift of prophecy and has seen the future in a dream. He comes up with a plan to tell the King and save his uncle from death. But can he do it in time?

Karen Wallace is a completely new to me author and when A&C Black sent me a copy of The Comet of Doom I quickly devoured it and re-read it on the commute to work this morning.

Wonderfully illustrated Helen Flook we very quickly come to know Chantico who is an average Aztec boy, liked by his friends and family, although his nickname is that of "little know-all" by his elders. And rather than it being directed to his prophetic visions, it is more discriminatory towards his age. He wants to become a seer like his uncle and finds that his father who is a brave warrior in the King's army is not the happiest of people about this.

It tells of Chantico's vision about the invasion of the Spanish and the destruction of the Aztec kingdom. Although the book is aimed at very young folk, the author is quite good at explaining the killing of captives taken during the various battles as sacrifices to the gods. It's not glorified and it isn't grimly described and because it is quite low in tone, it is almost easy to overlook.

I'd like to point out that it is a deceptive little book - small in size and perhaps you'd think small in storytelling but there are interesting facts dotted throughout the story and the writing is of excellent quality.

Definitely a worthwhile purchase! Find the talented Karen Wallace's website here and that of the illustrator, Helen Flook here. Thanks to A&C Black for sending The Comet of Doom along. Now, I need to go find some chili flavoured chocolate!
Who wrote this? Mark at 9:12 am

Email ThisBlogThis!Share to TwitterShare to FacebookShare to Pinterest
Labels: a and c black, karen wallace