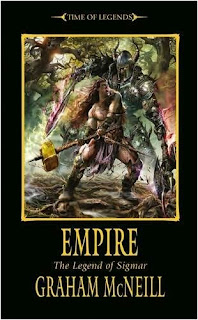 Having driven back the orc invaders, Sigmar unites the tribes of men and founds the Empire. The fledgling empire grows, but its prosperity is not assured. The lands are still wild and untamed, and many enemies lurk in the forests and the mountains. When a Chaos invasion sweeps down from Norsca, the ensuing conflict tests the abilities of Sigmar and his chieftains to the utmost.

This, the second in the Sigmar trilogy sees the newly crowned Emperor coming to terms with the unending demands of the vision he has brought to life. However, there’s no respite from the darkness at the fringe of his new empire , and he’s forced to ride to war against a myriad of evils that hunger to that hungers to tear down and consume the young Empire.

As with Heldenhammer, nothing seems a foregone conclusion, and I was pleased to see that Graham does not shirk from letting evil be true to its nature. Murder and bloodshed are never far away and Graham creates a vivid picture of a world one bloodied thrust away from falling into chaos and despair. The spectre of impending doom that overshadows everything helps keep the momentum of the action heavy story rolling forward, and combined with Sigmar’s personal battle against the dark side of his personality, the pages seem to keep turning of their own volition.

Don't read this if you have to be somewhere urgently- you'll be hard pressed to deny the urge for 'just one more page'.

My only gripe, and it's a minor one, is the exit of Gerreon, which felt slightly rushed- his wonderfully twisted and tormented character deserves more ‘screen time’, although I’m sure we’ll be seeing more of the traitorous bastard in the final instalment. If not, well, words will have to be had…

The blurb on the back cover describes this as “the second epic tale in the Sigmar trilogy” and epic is certainly the right word to describe it, although I’d have tried to squeeze 'heroic' in as well, and quite possibly a 'brilliant'.

Good story and character development, but he pretty much massacred cannon. Where was the Battle of the River Riek where Sigmar defeats Nagash? Where was Morkar, the first everchosen of Chaos?