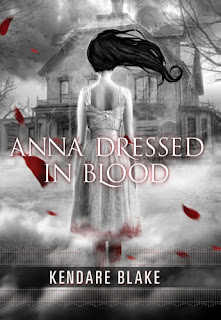 Synopsis
Cas Lowood has inherited an unusual vocation: He kills the dead.
So did his father before him, until he was gruesomely murdered by a ghost he sought to kill. Now, armed with his father's mysterious and deadly athame, Cas travels the country with his kitchen-witch mother and their spirit-sniffing cat. Together they follow legends and local lore, trying to keep up with the murderous dead—keeping pesky things like the future and friends at bay.

When they arrive in a new town in search of a ghost the locals call Anna Dressed in Blood, Cas doesn't expect anything outside of the ordinary: track, hunt, kill. What he finds instead is a girl entangled in curses and rage, a ghost like he's never faced before. She still wears the dress she wore on the day of her brutal murder in 1958: once white, now stained red and dripping with blood. Since her death, Anna has killed any and every person who has dared to step into the deserted Victorian she used to call home.

But she, for whatever reason, spares Cas's life.
I was looking up at my freshly organised shelves the other day and wondering what was going to make it into my picks of 2011. I've read some great books this year, books I've loved, books that I'd never let you borrow as I'd gaze at the empty space on my shelf and grind my teeth. But this year I've been feeling a little worried as there hasn't been a book that you'd have to attempt to prise out of my hands as I kicked out at you. Well, thank everything that's in the world, I've found it and it's Anna Dressed in Blood.
As the synopsis suggest, Cas lives a strange and disjointed life. He moves from city to town killing troublesome ghosts all the while knowing that this is what killed his dad. As a result he tries not to connect with anyone but drift though people's lives like the ghosts he seeks. But Thunder Bay is different. What Cas expects to be a quick stab and done turns into his biggest nightmare. People get killed and he finds that he can't work alone on this one, he might have to actually seek help. And then there's Anna who spared him the first time she saw him. He can't stop going to see her and before long he finds himself in a difficult situation.
So why do I love this book so much? First off, the voice is perfect. Cas is both worldy-wise and nonchalant but also vulnerable. He's smart too and the book crackles with humour. I found myself laughing openly to the Ghostbusters references and the way that he both reaches out to his new friends then tries to push them away. As he's initially quite a detached character, an observer, he reads people in an instant. This book also broke my heart a little as it's full of beautiful moments. I haven't even started on Anna who starts the book as a monster and then …? Well, then she becomes something else but also doesn't. I know that sounds kind of shady but I just don't want to spoil it for you so I'll leave it there.
This is no pseudo-horror either. I lived on Stephen King and Shaun Hutson at one point and some of the scenes in Anna are on a level footing of anything by them. At one point I was reading in broad daylight and still felt a chill. Cas has got himself mixed up with some magic that he doesn't quite understand. Fortunately his new friend (and psychic) Thomas's grandfather knows about all manner of things. The adults in this book are almost as appealing as the kids and I would have loved to have seen more of Gideon with his dusty books and Morfan's antique shop.
The book was a joy to read; a spooky, icky and disturbing joy. As an aside the cover is gorgeous and the print is the colour of dried blood. No, it really is. Now you'll have to buy it to see if I'm fibbing.
Who wrote this? Essjay at 7:00 am

Squeee! I want this book even more now. I am desperate to read it. I must sneak it into my next Amazon order.

This book sounds so good, and the chatter on twitter about it has been absolutely infectious. Definitely at the top of my wishlist.

I have this on my TBR and now Im even more excited to get round to it!! :D