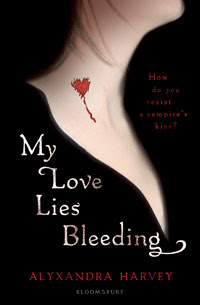 The Drakes are rather different to your usual neighbours. They are vampires and some of the members of the family date back to the twelfth century. One of the children, Solange, is the only born female vampire known and, as such, she poses a direct threat to the vampire queen.
Her best friend Lucy is human, and when Solange is kidnapped Lucy and Solange’s brother, Nicholas, set out to save her. Lucy soon discovers that she would like to be more than just friends with Nicholas. But how does one go about dating a vampire?

Meanwhile, Solange finds an unlikely ally in Kieran, a vampire slayer on the hunt for his father’s killer . . .
WARNING: Walk away now if you have issues with clever humourous writing and a bit of reworking of the vampire genre. Nothing about this novel is what you expect, even if you've had your fill of Twilight and Lestat.
Do stay however if you're interested in this brand new novel from Bloomsbury written by the beautifully named Alyxandra Harvey who writes with (sickening) ease.
I rolled my eyes - I won't lie - when I read the back cover and thought: oh my goodness, another vampire novel! Do I need this in my life?
And well, you know, after the opening couple of pages, I realised that yes, I did need another vampire novel in my life because this one is laugh out loud amusing in certain sections and so well written - did I mention that already? - I had to finish it. So I did. One sitting.
The main character for me anyway, is Lucy. She's the BFF. She's the one that keeps Solange - the almost vamp - grounded. She's amusing, she's fierce, she's clever and boy, can she hold her own against an entire family of slightly dramatic vamps.
Solange on the other hand is the one who is not entire comfortable with becoming a vampire. She's equally unhappy about being "courted" by various male vamps, to the extent where some of them try to kidnap her on a regular basis. By claiming Solange they not only "own" the only female vampire to have been born in several generations, because of some prophecy she may in fact become queen of the vamps. Tres dramatic!
My Love Lies Bleeding could have gone so bitterly wrong, being overly dramatic and emo, but instead it's a testament to friendship, family and a can-do attitude. It took me by surprise and I actually emailed the Bloomsbury PR person to say thanks for sending it because it was unlike anything I expected and I can irrevocably say that I genuinely enjoyed reading it. Without being in a vamp camp at all.
Although it works with the standard tropes: vampire family with a hot selection of vampire boys, the beautiful female vamp about to become one for all eternity, the vampire politics...it's Lucy inclusion in the novel that spins the entire trope on it's backside, stopping it from becoming a pastiche and making it something different.
It should get quite a bit of acclaim. I hope it does. It's a fun read. Lucy kicks butt, she has insane ideas and she pulls them off. Solange is probably too sweet and maybe a bit too trusting when it comes to who her family is, but she's been protected by her group of older male siblings who treat her like some precious ornament, yet they forget that she's as feisty as they are. Something else I liked was the proactiveness of Solange's parents - her mother is tough and a fighter, giving as good as she gets when the house gets attacked by a bunch of hunters out to kill them. The dad is the calming influence, the peacemaker, which is nice role reversal and one I heartily approve of. The vampire politics are dealt with very quickly so you know pretty soon how everything fits together.
When Solange is kidnapped Lucy obviously rushes to the rescue with Sol's brother Nicholas in tow. I thoroughly enjoyed the way these two interacted. Their attraction is very apparent yet it grows slowly in an amusing and juvenile way that had me laughing and cringing at the same time. I think I was smiling more than anything else whilst I read MLLB.
The chapters are written alternatively from Lucy then Solange's point of view. The author manages to keep the voices separate and engaging. You can tell she had a blast writing MLLB - the writing flows well and it (unfortunately for me) made it too quick a read. On the one hand I would have loved for it to have been a bit longer but on the other hand, I appreciate the pace it was written to and there was no protracted dull bits, which is a big plus point. The two main characters - Lucy and Solange - are both interesting and fun to spend time with. Nicholas sounds like a real honey and never mind the rest of the vampire siblings! More books are in the pipeline, as far as I know and I for one can't wait to read 'em!
My Love Lies Bleeding is published by Bloomsbury here in the UK in January 2010. Find Alyxandra Harvey's website here.
**COMPETITION**
I have been sent TWO copies of My Love Lies Bleeding to give away. In order to be in for a chance to win, leave comments below on your favourite vampire story of all time. This competition is open to UK entrants only. I'll announce winners (and post them) on 4th January.
Who wrote this? Liz at 8:09 am

Having read your review I am so glad I have a copy of this one in my TBR pile. I was hoping for something a little different (it's hard for a vampire book to really make a huge impression on me these days) and it sounds like this might be the one. Thanks for the review.

Ooh, put me in the hat, please, though this sounds like one I want to read before it gets anywhere near my daughter ;)

It used to be " Interview with a vampire" , these days "Let the right one in" is hard to beat

Any book with a kick-ass character called Lucy is alright with me :-)

Sounds great, please put me into the draw. My fave vampire story is Sunshine by Robin McKinley. Her Constantine was Edward's dad, I think, and the MC is fabulous. Highly recommended if you like vampire tales.

The Vampire Chronicles for me too. I've also seen Anne Rice's house in New Orleans! Unfortunately she didn't invite me in for a warming cup of O Negative! My Love lies Bleeding looks interesting. Thanks for running the competition.

I'm just compiling a list of books out in the UK in January and this is one of them.

Great review. Please put my name in your "hat" :).

I am just so in love with the cover, but I don't think I can handle anymore vampire action right now.

i love love love this book. It's going to be a fab series!!

Oops!
My favourite vampire book is um... either the Kim Harrison 'Rachel Morgan' series (She's a witch but the Vamps are very well drawn) or Poppy Z Brite's 'Lost Souls'.