The Thirteen Curses by Michelle Harrison 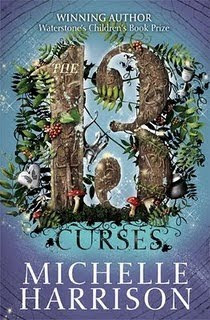 Synopsis
Trapped in the fairy realm, Red must beg an audience with the fairy court. There, she strikes a bargain. Her brother will be returned – but only if she can find the charms of Tanya’s bracelet, scattered in the human world.
Returning to Elvesden Manor, Red is assisted by Tanya and Fabian, and a desperate hunt begins. Soon they make a shocking discovery. The charms are now cursed with the twisted qualities of the thirteen treasures they represent ... and the longer they are missing, the worse the consequences will be.
Can Red, Tanya and Fabian find all the charms? And even if they do, will the fairies keep their promise?
I loved The Thirteen Treasures so was interested to see how the follow-up had moved the characters on. The first change is that Red is now the main protagonist. Tanya had her host of problems but in comparison to Red they were fairly minor. The cover and title reflect this and I’m impressed by the author’s and Simon & Schuster’s attention to detail. The world that Harrison created springs back to life, picking up where the last book left off. Because Red is the main character the book seems a little more adult too. That’s not to say that Tanya, Fabian and Florence don’t get a look in. Happily, they all play a part in this story which eased me into the change of protagonist.
We find Red in the land of fairy searching for her abducted brother. She soon falls foul of the forest’s twisted wise woman and becomes her prisoner. Warwick, the manor groundskeeper, is trapped there too and they help each other escape and search for James. The resulting visit with the fairy court leaves Warwick in prison and Red searching for the thirteen charms from the bracelet which appeared in the first book. Red’s meeting with Warwick gives her a chance to share her sad back story with the reader and, in my opinion, this gives the book a real depth. Red isn’t as instantly likeable as Tanya but I understood why and was prepared to stand by her when she snapped at people and put her quest first. In fact, it’s quite refreshing to have a main character who has outbursts of temper, isn’t always selfless and can be thoughtless!
It’s the tiny details in this book that make it stand out; the parallel world of fairy and how it relates to ours, the folk law or the bitter-sweet (or bitter-bitter much of the time) nature of fairies and how they can ruin lives. I found myself swept up in the story and often felt sorry for poor Fabian who doesn’t have the gift to see fairies but tags along throughout.
The search for the thirteen charms is thrilling and dark. Without giving too much away it gets spooky and dangerous. There are tunnels, graveyards and abandoned churches! The way that the charms have been twisted to curse the finder with their literal meaning is such a great twist! As time goes on the way that the curse reacts is more extreme. The best twist of all is kept for the end, it’s beautifully done and rounded the book off perfectly. A word about the illustrations; they’re cute and are also by Michelle Harrison. I think they help give this book a slightly old-fashioned feel. Both of these novels will stand the test of time, I think. They have a timeless air that leads me to imagine them being read twenty years from now.
Check out the author’s website at http://www.michelleharrisonbooks.com/ and watch out for the third book due out January 2011.

*reviewed by Esssjay (Sarah Bryars who is on her way to a holiday and didn't have a chance to sign in to post this!)*
Who wrote this? Liz at 8:58 am

I agree, this series is awesome and I definitely see them becoming modern classics too. Roll on next January!

Great review :)
I absolutely loved this book. Red's story was fascinating and compelling. The twist was perfect - can't wait to find out what happens next!

I had to pass this on eon to one of the youth reviewers but am sorry i didn't get the chance to read it first.

I really want to read this series now :) Thanks for a great review.

Just back from hols, thanks for all your comments guys :)

Great review! I've read the first book of the series but this has inspired me to read the next book.