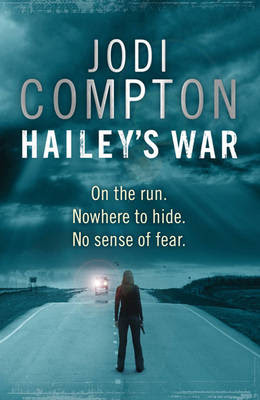 Twenty-four-year-old Hailey Cain has dropped out of the US Military Academy for reasons she won't reveal. She has had to leave Los Angeles and it would be too big a risk for her to return. Now working as a bike messenger in San Francisco, Hailey keeps a low profile, until a friend from high school wants Hailey to escort the cousin of a recently murdered gang member across the border to Mexico. It's a mission that will nearly cost Hailey her life, causing her to choose more than once between loyalty and lawlessness, and forcing her to confront two very big secrets in her past...

Not exactly the book I would have picked up to read in a bookshop.  The reason is mainly because of the cover - it didn't inspire me with confidence.  It was maybe a bit too generic but that is the only thing about this book that is generic.  Once I had read the blurb on the back, I was completely in the game, ready to be swept off my feet.  And I wasn't disappointed.

I had my own thoughts where it mentioned an old high school friend, now a career criminal, calls asking for a favour, I completely thought the following: drugdealing ex-boyfriend asks for a favour.  No, instead we have the fantastically named female Warchild (Serena) who runs the Trece Sucias, a Latino gang in Los Angeles. Serena and Hailey were nodding acquaintances  in high school.  They never really spoke but they were aware of each other.  Serena dropped out and of school and everyone thought she had gone back to Mexico with her family but it's only after Hailey leaves West Point and moves back to LA that she meets up with Serena and they become friends that she finds out what happened to Serena back in high school.

Serena got jumped in to a Latina gang but instead of being one of the goodtime girls that get passed around from member to member, she started her own affiliated gang of females, the Trece Sucias.  Fierce and independent they did the smaller jobs, pharmacies and car-jackings.  The bloodless crimes.  But never once did I as the reader ever fall for Serena - the girl was dangerous with strong affiliations and a surprisingly logical head on her shoulders, but the key words here are dangerous and uncompromising.  When she learns of Hailey's background at one of the forefront military schools on the East Coast, West Point, she asks Hailey to teach her girls how to protect themselves, how to be stronger.  Hailey refuses, she also refuses to be jumped in.  But she does make it clear to Serena that she is her friend and when she moves to San Francisco, she makes sure to exchange telephone numbers.

In real life, away from Serena and her girls, Hailey is one of the best paid bicycle couriers in and around San Francisco.  She has very little, and lives above the courier depot in a tiny apartment and she keeps her life uncomplicated.  Occasionally she'd go to the Golden Gate Bridge and look out over the bay area.  She would go out of her way to talk down any jumpers she may inadvertently come across.  And this small revelation is what startled me.  It is a brave and fearless and a very risky thing to do, but then that is Hailey.  The girl should have a sign that says expect the unexpected.

When Serena contacts Hailey to help a family member of one of her gang-members to get back to this tiny village in Mexico, Hailey reluctantly agrees. It will give her something to do - to get out of town, get her mind together.  She's realised she's drifting and not doing anything with her life.  She meets the young girl who seems to be quiet and shy and quite lovely.  They don't really have an immediate rapport but that's fine with Hailey.  She's looking at the trip to sort herself out.  But it is after they cross into Mexico that things go very wrong.  Nidia is taken and Hailey is left to die out in the desert.  But Hailey is a fighter.  And she survives her gunshot wounds and slowly but surely she begins to heal after several weeks in a coma in Mexico.  When it transpires that no one has reported her missing she realises the extent she's cut herself off from her family and friends.

She gets sent back to the States and hunts down Serena, convinced that the gangleader had set her up and that she had a hand in Nidia's abduction.  Serena and Hailey have it out and when it transpires that there is far more to Nidia's story and clues start falling into place, Serena, her team of girls and Hailey start formulating a plan on how to track down Nidia and these men who have taken her.

The action sequences are visceral and well written. There is an element of the Bourne and new Bond movies here - close quarter mean and dirty fighting.  Get in, get out as quick as you can.  And importantly, stay alive.

But getting Nidia is only half of the battle won.  As the novel draws to its conclusion with all the world seeming to want Hailey dead, the stakes are raised.  And she ends up making some tough choices and facing someone whom she had wronged quite badly in the past.

Hailey's War is wildly different to anything I have ever read.  Especially when it comes to thrillers.  Some of the regular beats are there, but the setting is completely different and it is so tightly plotted you can bounce pennies off its butt.

The writing is superb, the action sequences are refreshingly gritty and real and told with a matter of factness that makes you feel more than just a bit uncomfortable.  Hailey is such a wonderfully complex character that I lost my heart to her within the first few pages of this book.  If I close my eyes and think of ways to describe Hailey I would say the following: self-possessed, confident, bored, ennui, skilled, dangerous, intelligent, determined, volatile, centred.

Hailey's War is about friendship and family and honour and the ties that bind them all together.  And how far you would go to keep your word and to make things right. Hailey's War is out now in paperback, published by Simon & Schuster UK.
Who wrote this? Liz at 7:32 am

The cover wouldn't have had me racing for it either, but your review definitely makes me want it.