The Reapers Are The Angels by Alden Bell 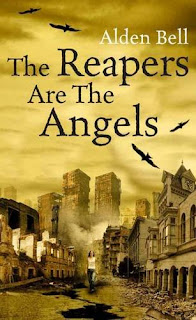 God is a slick god. Temple knows. She knows because of all the crackerjack miracles still to be seen on this ruined globe...

Older than her years and completely alone, Temple is just trying to live one day at a time in a post-apocalyptic world, where the undead roam endlessly, and the remnant of mankind who have survived, at times, seem to retain little humanity themselves.

This is the world she was born into. Temple has known nothing else. Her journey takes her to far-flung places, to people struggling to maintain some semblance of civilization – and to those who have created a new world order for themselves.

When she comes across the helpless Maury, she attempts to set one thing right, if she can just get him back to his family in Texas then maybe it will bring redemption for some of the terrible things she's done in her past. Because Temple has had to fight to survive, has done things that she's not proud of and, along the road, she’s made enemies.

Now one vengeful man is determined that, in a world gone mad, killing her is the one thing that makes sense…

Reapers hit the shelves in September last year, and it’s a veritable crime that it took so long to work its way into my hands.

Set amidst the detritus and crumbling remains of post zombie apocalypse America, Reapers follows the story of a teenage girl named Temple as she meanders across the empty landscape, its dangers both hidden and overt. Temple’s a loner and a survivor though, born into a merciless, dystopian world and hardened by the necessities of survival when the rules of civilization are passing from history into myth.

An encounter with a community of survivors changes the course of her life though when she reacts to a personal attack with the same vicious aplomb that had let her survive this long. She breaks away, and soon thereafter finds herself taking reluctant charge of Maury, a slow but gentle man.

But she knows that the dead man’s brother is sworn to vengeance, bound by his own code as she is by hers. The pursuit plays out against the backdrop of a bleak and unforgiving world, with glimpses of hope and beauty amidst the shambling horrors that lurk in wait for the unwary.

It’s written in an unusual way, but one that you become accustomed to quite quickly and actually helps set the tone of the story. Temple’s a vivid character, brought to life by Bell’s elegant and evocative storytelling and overall Reapers will surprise you, as it did me, in the best possible way whether you’re a fan of dystopian fiction or not.

Email ThisBlogThis!Share to TwitterShare to FacebookShare to Pinterest
Labels: Alden Bell, apocalyptic, The Reapers are the Angels, Tor UK, Zombies

This looks really good...Thanks for the review!

Ooo, one for the next book order, methinks.
Thanks for the review. It looks good.
S