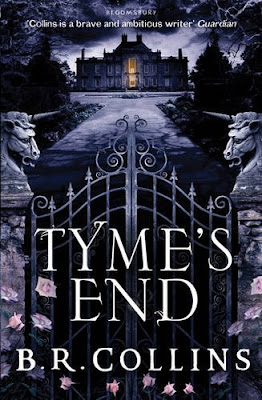 Bibi feels out of place wherever she goes - everywhere, that is, except for Tyme's End, the deserted house she breaks into whenever she thinks nobody is nearby.  There she meets Oliver, the owner, who has returned after ten years away.  Bibi's and Olivers's lives become inextricably linked as they are both pulled towards Tyme's End.  For Tyme's End is more than just a house.  It is a house that can be by turns romantic, beguiling, sinister and malevolent.  It is a house that once had an evil and manipulative owner.  And nobody who enters Tyme's End must prepare themselves for terror.


BR Collins has gone from a "writer to watch" to a writer who is so self-assured that she can tackle a haunted house story with the aplomb and skill of any of our grandmasters, including Poe, King, Layman, Blackwood, Campbell and well, anyone else you would like to name.

The story of Tyme's End is told in three key stages and they are defined by the year the story is told.  We have 2006, which deals with Bibi's story.  Secondly there is 1996 which is Oliver's story and finally, 1936 and it tells Oliver's grandfather's story.

The regressive storytelling where we go backwards in the house's history took me by surprise.  I thought we would stick with Bibi's story and was therefore thrown quite a bit by moving onto Oliver's story.  Initially it did lift me out of the story, but only briefly, once I realised what the author was doing.

When we meet Bibi she's going through a tough time.  She feels an outsider and acts surly and unpleasant when in fact she is genuinely a highly intelligent and charming girl, a bit more mature than usual and also quite together, even if she has her various hang-ups. She loves Tyme's End and sneaks in to spend time by herself.  She has a mattress up in one of the rooms and some favourite things.  This is where she feels at home, safe and somewhere she can hide from her family.  She's adopted and feels at odds with the world, as if no one can understand what she's going through.  Bibi is an intensely complicated character and could easily have carried an entire novel by herself hence my surprise when her story gets wrapped up really well in the first third of the novel.  She meets Oliver and he of course chases her out.  But Bibi is made of sterner stuff and she finds herself returning to Tyme's End.  Oliver is older, in his twenties and seems as conflicted as Bibi about everything in his life.  But as he's an adult he feels the need to be in charge, to figure things out.

With Bibi by his side Oliver uncovers some truths and comes to various conclusions. Oliver and Bibi's relationship starts full of conflict but within a short space of time they connect with each other in a way that forms a catalyst for the first part of the story.  I loved both these flawed fiery characters and thought that BRC really couldn't do better than them.

When we leave Bibi and we turn around to look into Oliver's time spent with his grandfather and Tyme's End, we are shown why Oliver reacted to Bibi the way he had in the beginning of the book.  With Bibi we only found out a few snippets of information as to why Oliver hates Tyme's End so much.  In this part of the book, the 1996 section, all of it is made clear as it pertains to Oliver and his perceptions.  This is the part of the novel that I loved the most - deeply odd and eerie, it has the psychological element to it that makes you check behind your sofa as you sit there reading.

Finally, we get to the 1936 section that deals with Oliver's grandfather's experiences at Tyme's End.  He is also called Oliver and for clarity we'll call him Senior.  Senior is a handsome but poor student at Cambridge where he is reading History.  He happened to meet the owner of Tyme's Hall, the deeply enigmatic and charismatic H J Martin - Jack to his friends - and gets invited to Tyme's Hall to spend some time there over a very hot Summer. There is initially this sense of everything being perfect but slowly but surely reality intrudes and Senior realises that Jack may not be all he seems.  We spend the last part of the novel with Senior and Jack and some other people at Tyme's End and here is where the answers lie, that are only alluded to in the other two sections of the book.  We learn what we need to know about Jack and about Oliver Senior.  And although it's not jumping out of dark closets scary, it's that slow pervasive creep of delicious horror that does the trick here, making it a truly unforgettable sequence to end the novel on.

I really fell for these characters.  I loved the story and I feel a bit sad for Tyme's End itself.  I cannot recommend this deliciously creepy novel enough.  BR Collins's writing is vivid and chilling and truly engaging. This has to be one of the highlights of 2011.  And it's promising to be a cracking year.
Who wrote this? Liz at 8:06 am

What a fantastic review. I am certainly adding this one to the wishlist now Thanks :D

I am really looking foward to reading this one. I loved reading your review. I really enjoy books that take you back to different periods. Infinite Days just did that to me.

I'll have to get this one pre-ordered I think.

I've got this to read...was already looking forward to it but even more now. Creepy haunted house stories are one of my faves.