The Diviner's Tale by Bradford Morrow 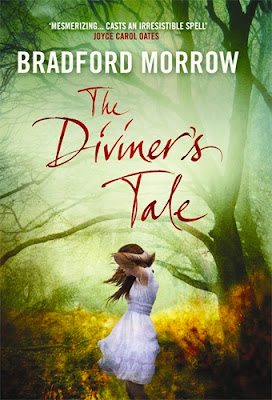 Cassandra Brooks is a single mother-of-two, schoolteacher and water diviner. Deep in the woods as she dowses the land for a property developer, she is confronted by the body of a young girl, swinging from a tree, hanged. When she returns with the authorities, the body has vanished. Already regarded as an eccentric, her story is disbelieved- until a girl turns up in the woods, alive, mute and identical to the girl in Cassandra's vision.
In the days that follow, Cassandra's visions become darker and more frequent as they begin to take on a tangible form. Forced to confront a past she has tried to forget, Cassandra finds herself locked in a game of cat-and-mouse with a real life killer who has haunted her for longer than she can remember.

At once an ingeniously plotted mystery and a magical love story, The Diviner’s Tale will pull you helplessly down into Cassandra’s luminous world.
I've had a great time reading The Diviner's Tale at the end of last year whilst we were experiencing some truly rubbish weather.  Whilst everyone else was shivering I was walking the land with Cassandra, divining water, learning how she did what she did, where she came from and what led her to seeing the body of the young girl that was / was not there.
Bradford Morrow's writing is engaging and Cassandra has immediately become one of my favourite female heroines.  No, she's not necessarily kick-ass in the way fantasy women are kick ass but she has this timeless quality about her that I found truly appealing.  She's the narrator of our story and as such the best qualified to introduce us to divining and her unusual upbringing.  She has a history of mental illness, where her parents had sent her to be examined and evaluated and pumped full of drugs. Cassandra came out of this not necessarily a changed person, but one who is more wary, who watches for signs of the illness like you or I would watch and make sure it is safe to cross the road.
So when Cassandra sees the dead girl in the forest, hanging from a tree, she's uncertain.  Is it real or is it her illness starting up again? But when she touches the young woman she's jolted out of her half-dream and she realises that it is very real indeed.  She runs and finds the police who search the woods but when they conduct the search, they discover nothing.  Cassandra's self-doubt is tempered by her twin sons' Jonah and Morgan who close ranks around their mother and offers her a buffer against the harsh reality of the world outside.  They are great kids, well written and full of character.  I loved them to bits and think the author did a great job including the boys in this novel.
Cassandra's story is told in both the present and the past, the near past and the distant past.  As the story unfolds and we come to learn more about Cassandra's divining talent, the first incident that brought it to her parent's attention and how she became a social outcast to some extent, we learn that what we know as the truth may not be the truth after all.  Cassandra has a very close, very personal relationship with her father who had been a diviner himself before he became too ill to continue doing the job.  Nep is a wonderful rich character which remains subtly underwritten by the author.  And by that I mean that Nep's story could so easily have dominated this book but instead we are given only a handful of meetings with Nep and Cassandra and her mum, Rosalie.
In some instances Cassandra's narrative leads us astray and she becomes the unreliable narrator.  We aren't sure if she's gone over the edge into madness or if what she sees is genuinely true.  The author walks such a fine line here that I nearly didn't make up my mind until the very end.  The story is plotted so well, bringing pieces of Cassandra's past in to sharp relief to explain the current happenings, that as it reaches its climax, you are still wondering if what she's going through is real or imagined.  I won't hesitate recommending this to readers and to aspiring writers, to especially note the use of voice and the intricate plotting.
I really can't pigeonhole this book - it's a mix of crime and suspense mixed with a hint of the paranormal written in an accessible literary fashion. There is much love in my heart for The Diviner's Tale and I loved how the book ended.  It truly is a remarkable book written by a remarkable author whom I've never read in the past.  Needless to say, I am hoping that there may be another novel featuring Cassandra, but even if there isn't this one will be re-read several times more for its sheer storytelling genius.
The Diviner's Tale is out later this month from Corvus.  Find Bradford Morrow's website here.
Who wrote this? Liz at 7:45 am

Hi :) You've been awarded the Stylish Blogger Award (by me)

I've seen about this book somewhere before and thought it sounded good. So thanks for your review, I'll certainly check it out now :)

This book sounds really intriguing, think I shall have to get a copy! Great review!