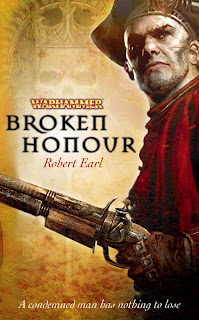 The armies of Hochland are at breaking point. Beset on all sides by the feral beastmen, the safety and prosperity of the province is shattered. These are desperate times. Mercenary Captain Eriksson looks to capitalise on the conflict, buying the freedom of a group of prisoners to form a new free company. The criminals are delighted to be released, but this comes at a terrible price- to fight and die in the upcoming conflict. Eriksson must led his makeshift company into one bloody battle after another, putting his faith in those who gave up on honour long ago. On the battlefields of Hochland, either damnation or redemption awaits them.

Broken Honour opens with the army of General Count von Brechthold taking to the field in what he and they expect to be just another annual cull of the beastmen who infest the thick forests of the province. But there’s a new leader amongst the herds of bestial horrors that await them, and the army is spectacularly destroyed apart from a young nobleman named Viksberg, who refuses to die on that muddy field and flees towards safety.

Shortly thereafter we meet Captain Eriksson, an experienced and cunning mercenary captain for whom the strife that besets Hochland is an opportunity, not a calamity. After some narrow escapes he gets his new free company, a ragtag collection of thieves and murderers, and starts the process of forging them into something that resembles a military unit. But amongst his company is someone who knows the truth of Viksberg’s crimes, and soon they have more than beastmen (whose feral rage comes through very well throughout) plotting their death as the war rushes towards a mighty clash that will see either side utterly destroyed.

The transformation of the criminal mob into the Gentlemen’s Free Company of Hergig is handled well- there’s no quick fix or Hollywood style montage to gloss over the fact that these are criminals that Eriksson is dealing with.

As a setting, Warhammer fantasy has a distinctive flavour. It’s a world constantly under siege by the forces of chaos in all its guises, in the midst of which people get on with their lives, surrounded as they are in equal measures by despair and ignorance, nobility and defiant courage. Robert Earl has managed to capture this atmosphere quite neatly. It’s nothing definite that you can put your finger on, but like a colour built up of several layers of thin paint, it definitely comes through as Eriksson and his men fight to survive against the worst that Viksberg’s spite and the ravening beastmen can throw at them.

I enjoyed the fast pace and vicious action, and consumed it while commuting in over Christmas. It’s a standalone novel that delivers classic Warhammer action, but is very much accessible for anyone unfamiliar with the setting.