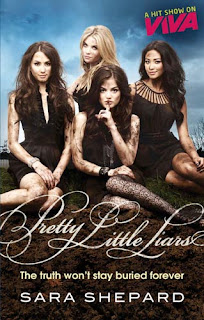 Synopsis
Aria, Emily, Spencer, Hanna and Alison have been best friends since the third grade. They go everywhere together, thinking no-one can come between them. If anyone is the ringleader of the group it is Alison, and the other girls cannot help but confide all their secrets to her.

One night, during a sleepover, Alison goes missing. Her body is never found. The girls mourn her death but move apart after time, assuming their secrets have disappeared with Alison too.

Three years later and Aria is having an affair with her teacher; Emily is questioning her sexuality; Hanna is a thief; and Spencer is flirting with her sister's fiance. They all think their secrets are safe, until they starting receiving messages from the mysterious A – who knows exactly what they are all up to, and is threatening to spill the beans . . .
In the opening chapters of this book the group of friends seem unremarkable and fairly typical. Their little gang is made up of leaders and followers and Alison is clearly at the top. As I read on I found that Alison was actually quite a nasty piece of work and used the divide and conquer technique in her, "friendships." When she disappears at a sleepover the rest of the gang drift apart until eventually they barely speak to each other.
It was this aspect of the book that was the most interesting to me. The book perfectly captures the insecurity of school and friendships - how you can be friends one day and then tormented the next. Emily, Hanna and Spencer are great characters in their own rights and have clearly blossomed in varying degrees since Alison went missing. The dynamics of the group three years earlier made slightly uncomfortable reading for me. No-one was prepared to cross Alison and so her way of managing her friends continued.
Each girl has a secret that only Alison knew and as the book develops we get to know what they are. It becomes apparent that their secrets are not as safe as they thought as they all receive texts, emails, messages from an A. who seems to be aware of their every move. All three girls are going through various issues and A's interest only serves to ramp up the tension. There are other secrets too, ones that are not revealed to the reader by the close of this book and it's this (alongside a wish that things improve for the three main characters) that will bring readers back for more.
This book is a great example of how much books aimed at teens have changed over the years. There's a mass of issues confronted: racism, eating disorders and self harm to name just a few. Littered throughout the book are a string of references to current trends and labels and had I been the target age group I'd have eaten this up with a spoon and read the whole series.
Who wrote this? Essjay at 7:40 am

I've seen the show on Viva and it was really good there, but I was wondering if the books were a little Gossip Girl-ly :S
I might buy the first one though and give it a try, now that I've read this though