When Last I Died by Gladys Mitchell 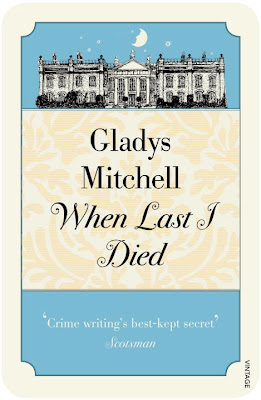 When Mrs Bradley’s grandson finds an old diary in her rented cottage it attracts the interest of this most unconventional of detectives, for the book’s now deceased owner was once suspected of the murders of both her aunt and cousin. Does the missing diary finally reveal what happened to old Aunt Flora? Is the case of Bella Foxley really closed? And what happened to the boys from the local reformatory who went missing at the same time? As events unfold, Mrs. Bradley faces one of her most difficult cases to date, one that will keep readers guessing until the very end…
When Last I Died is the 2nd re-release from Vintage Books of titles from Gladys Mitchell's Mrs Bradley Mysteries series. It's rare for a publisher to shine their spotlights on works that have faded from view though some works seem to keep finding the light over and over again with a little help, whatever happened behind the scenes I'm glad I got chance start my exploration of Mitchell's work.
Why? Because I enjoyed The Saltmarsh Murders but loved When Last I Died even more.
Why? As there is a difference in the narration. The first was narrated by the curate of the sleepy village who was good but only seeing Mrs Bradley from the outside. The narrator in this one is exterior to the action and follows around Mrs Bradley's actions and internal thoughts, so we get to know Mrs Bradley a litte more intimately.
I have to say as a character she's fab. She's nosey, steely, insightful and intelligent without giving over to arrogance. She's also very curious, and it's that curiousity which is raised when her grandson finds an old diary in a rented cottage. The book's owner is now deceased and was once suspected of the murders of both her aunt and cousin. But the contents raises more questions than it answers. Does it reveal what actually happended to Aunt Flora? Is the case of Bella Foxley really closed? And what happened to the boys from the local refectory who went missing that same time?
And it really is a mystery, one that keeps both the reader and Mrs Bradley guessing. My only slight reluctance in the story comes, I guess, from Mrs Bradley pushing at a case that is dead and buried and she doesn't seem to get enough resistance to her questioning as one might expect.. but then this is a novel from 1941 and she is grandee of society so it doesn't feel too odd. That was my only doubt.
A great device used by Mitchell is the diary which is reprinted, and which on first glance is heartfelt and absorbing but Mrs Bradley feels differently and she sticks her nose in to find out more about the events. It definitely wrong footed me.
It's a short novel at 208 pages, but it's packed with twists, turns and surprises like all good mysteries should be. And in this case the truth of the matter is much stranger than the fiction that surrounds it.
Who wrote this? Gav Reads at 10:30 am

Sounds interesting. Yes, without re-release some of us would never get to read some great novels.

I hadn't heard of this one (or the series) before, but your review has definitely sparked an interest. Thanks :)

nice to see some forgotten classics coming back to life