My Sister Lives on the Mantelpiece by Annabel Pitcher

We've received some truly exclusive bits and pieces from Orion Children's Department about a debut novel coming from them this year.

I've read an early proof of Annabel's book after the publicity person, Nina, put it in my hands and said: read it, it's unlike anything you've come across since maybe The Curious Incident of the Dog in the Night Time.

I was hesitant. I KNEW that reading it was going to turn me into a slobbering mess of tears and emotions and I was right. But it turned me into a sniffling girl for all the right reasons. It also made me laugh out loud. It made me want to punch a character in the book, it made me want to punch the air in victory as the story developed and I came to love the characters but most of all, it's made me talk (quietly for now) about it to everyone I've come across.

My Sister Lives on the Mantelpiece by Annabel Pitcher is only out in on 1st March but I'm here to prod you to think about buying it. It is an amazing novel - the story is fabulous and heartwarming and the main character, Jamie, has not left me since I first read it. I've passed it onto Essjay to read because I needed to share it with someone so that I could talk about it. She read it in a sitting and we both just looked at each other and went: dear heavens, this is good.

But, before I waffle on even more, here is a personalised message to MFB readers from Annabel.

We are so very pleased that she's agreed to do this short clip.  We'll be hosting the actual book trailer soon as well as a guest post by Annabel in due course in which I've asked her to talk to us about her writing process.

In the meantime, we can share the cover with you and later this week I'll be putting up some photos and such from her launch later today, which I'm lucky enough to be invited to.  I may even be able to arrange a book or two (signed) to give away. 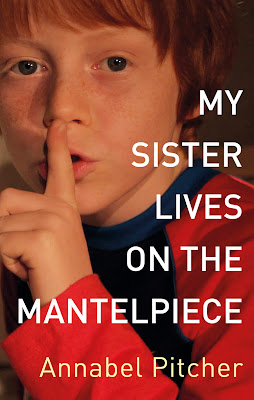 You made my day, not just with a book you loved but with the insert. I love listening to authors talk about their books. Thanks

I keep seeing this reviewed...I'm desperate to read it, can't wait for it to be out!

Can't wait to read this one too. I mentioned it on my blog on Tuesday. It sounds brilliant. Very current too.

This book looks so good - thanks for sharing :)

I got a proof for review of this yesterday, can't wait to read it! It looks fantastic, LOVE the trailer!!

OMG is this coming to the States? This sounds like my type of book - what an amazing review!