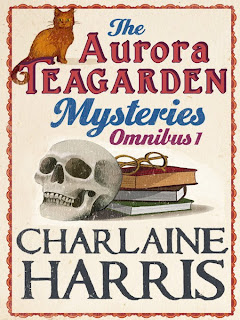 
Aurora Teagarden loves reading about famous murderers - until she finds herself investigating a real-life killing spree!

The first four novels in the Aurora Teagarden mysteries series. Lawrenceton, Georgia, may be a growing suburb of Atlanta, but it's still a small town at heart. Librarian Aurora Teagarden - Roe - grew up there, and she reckons she knows everything about her fellow townsfolk, including which ones share her interest in the darker side of human nature.

While on my Christmas break I looked around my shelves for something I'd be dying to read but hadn't found the time. This massive omnibus has been on my shelves, staring at me, for ages so I thought I'd give it a try. I'm a big fan of Charlaine Harris and of course the Sookie Stackhouse series. A couple of years ago I also read the Lily Bard books which I not only enjoyed but thought tackled a difficult subject with sensitivity. I'd tried to get hold of the Teagarden books but with no luck so was pleased to see the release of the omnibus. With the second one on the way I thought I should get on and review the first. These books were originally published in the early to mid-nineties so are a little tricky to find in there original form.

Aurora Teagarden is a librarian in Lawrenceton, unmarried and living alone. Although she tries not to let this get her down she's reminded by everyone she knows in the town she's lived in her whole life. In Real Murders she discovers a dead body in the toilet of a club she attends. The club get together each month and discuss real-life murders which makes Aurora (or Roe as she's known) a bit of an expert in police investigations and clues. She finds herself thrown out of her comfy rut into a world of danger and suspicion. What I love about Roe is that she doesn't pretend to take everything in her stride. She's horrified by the things that are happening and often runs back to her house to recover. It's this very, "realness," that makes the author's main characters so appealing.

What I love about Charlaine Harris's writing is that you instantly feel as if you're talking to an old friend. With Lily, Sookie and now Aurora I instantly slip in beside them when I open the page and watch events unfold. The way that incidental, everyday happenings are present alongside the main events make me love her books even more. I want to know what's she's having for lunch, who she meets while running errands and her thoughts on co-workers. This, alongside Aurora's troubled love life, are as important to me as the murder solving. A word of caution though - If you're looking for a taut who-dunnit with thrills and spills then these are not the books for you. However, if you like an insight into a Southern, gossipy small town with murders aplenty then give it a go. By the time we get to The Julius House, Roe's life has changed substantially but I still found myself willing her along to succeed. I'll definitely be getting the second omnibus and am extremely grateful that these can finally be purchased.
Who wrote this? Essjay at 7:30 am

I've got a stack of Charlaine Harris books here to be read and this sounds like another to at to them! :)

I was completely unaware of these books. I'll have to note them down I think - thanks for that :)