Those crazy people at Mills & Boon & some notebook love

Like most of the female population of the world I read quite a bit of Mills and Boons growing up.  There wasn't much else available in the 80's in South Africa, especially if you were a teen.  These books were never explicit, whatever hanky panky there was happened behind closed doors.  That was until we hit high school and we got lured in by Jackie Collins and Eric van Lustbader romps.  But even so, the books I read dated from the 60's and 70's and they were never new.  Always passed down or found from somewhere and pressed into my hands.  I remember it fondly.  But, having said that, I've not read a M&B title in many many years but it doesn't stop me loving them and remembering them nostalgically.

I received an email today from Time Out magazines about things to do in and around London and wouldn't you know...they mentioned a new pop-up shop in Selfridges, carrying Mills & Boons titles.

I had to go and look and got chatting to the lovely sales assistant there who gave me permission to take some photos of their display.  I whipped out my iphone faster than George Clooney could break a heart and started snapping away.

This is what I found: 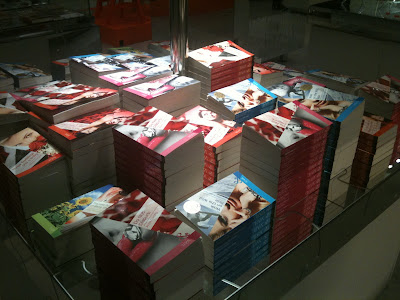 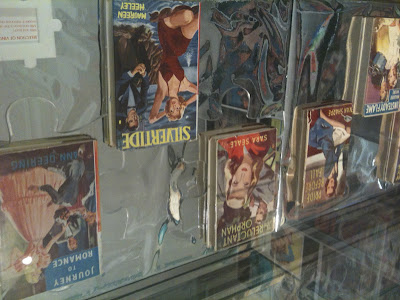 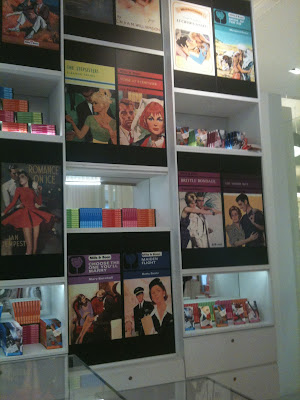 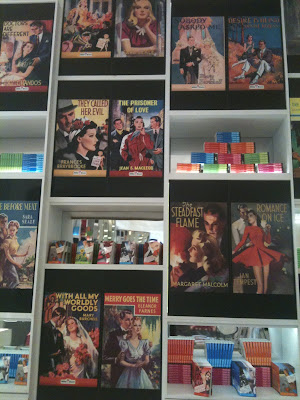 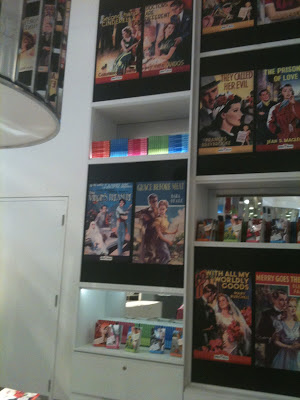 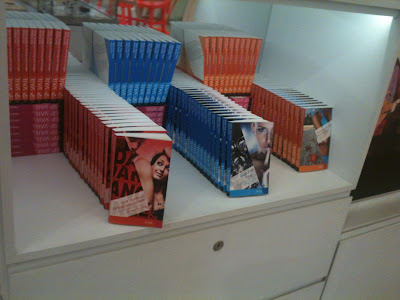 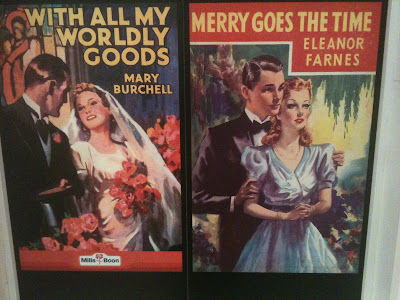 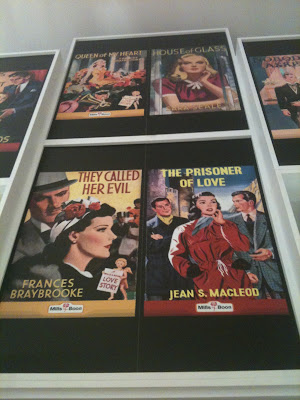 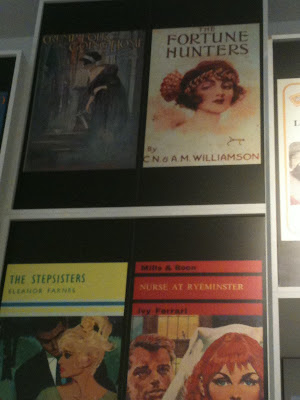 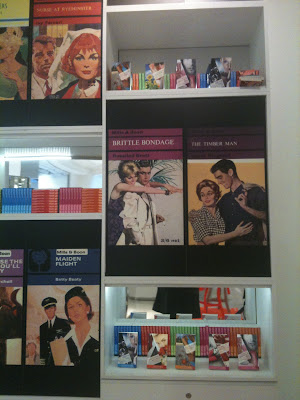 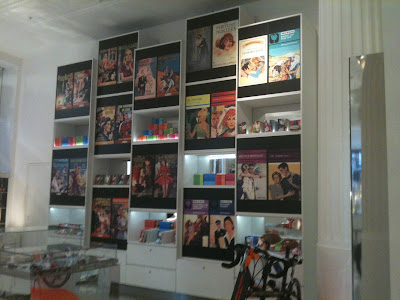 It really is such a great pop-up shop with some fabulous new modern titles.  Kudos to the marketing people at M&B for coming up with this.  Several other people were browsing the books and looking at those posters.  I reckon that they would sell a shedload of the pictures if they printed them on canvas / posters.  There were several I would have liked!

Then, I can't ever go to Selfridges and not ogle their notebooks.  You only need to talk to me for five minutes before you realise I am a notebook and journal nutter. 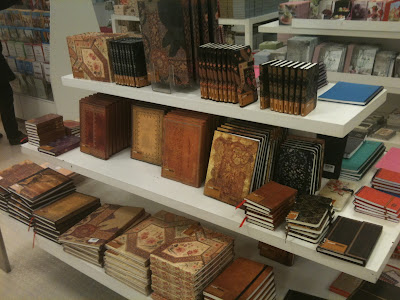 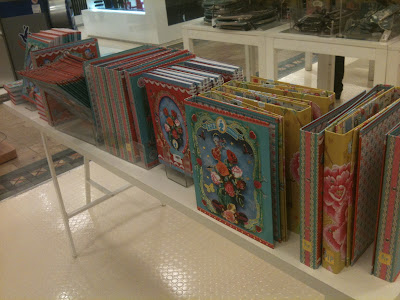 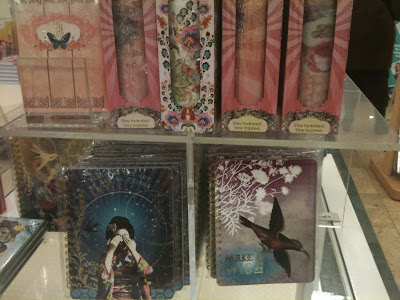 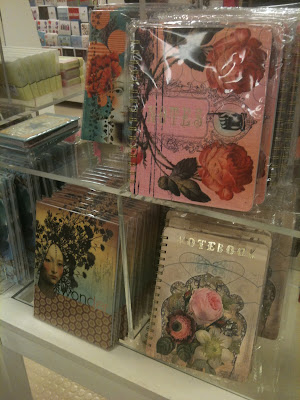 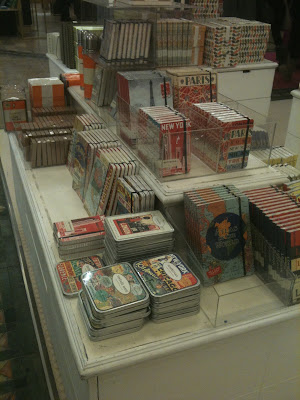 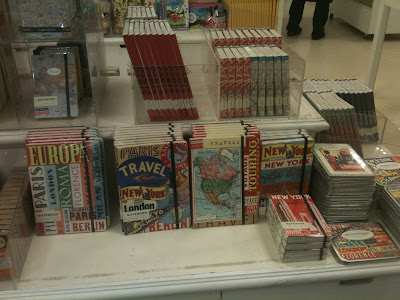 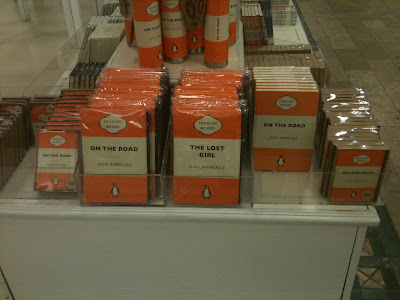 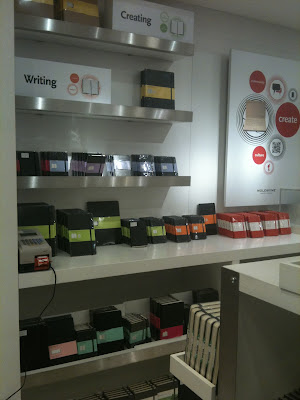 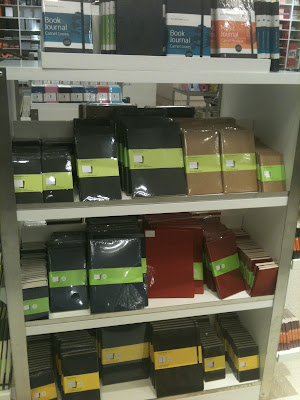 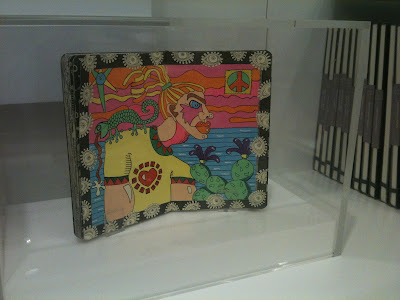 I hasten to add, that in no way shape or form do I work or have anything to do with Selfridges or Mills & Boon.  I am just a geek. Who likes shiny things.
Who wrote this? Liz at 3:35 pm

Email ThisBlogThis!Share to TwitterShare to FacebookShare to Pinterest
Labels: mills and boon, notebooks and journals, selfridges

Gorgeous! Thank you - I loved looking at all these!

Is it sad that I embiggened all the notebook photos and squinted at them to see if there were any ones that were new to me and if so who made them so that I could quickly Google them and order one online?

Oh, well. I suppose that ship has sailed.

I have never ever read a Mills & Boon, or "collection Harlequin" as they are known in France. But they are getting very popular again there too. It is almost as if we have gone full-circle: anything goes in books these days and yet we go back to more subtle stuff!
I love, love notebooks too. Check out French make La Marelle en Papier, they commission French illustrators to illustrate them: http://www.lamarelle.net/c/282/p/9ebd312e337cf9b80f57ef73a7d472d9/La-Marelle-Stationery.html
:0)

You really took me back with this post. Mills and Boon followed by Jackie Collins. Those were the days. Remember Lace?

I love the look of this shop.
Loving the notebooks.

"Like most of the female population of the world I read quite a bit of Mills and Boons growing up."

Really? I don't know a single woman who has ever read a Mills and Boon - must just make us all a massive minority

@Dream in Grey - thanks for dropping by and commenting.

@Luisa and @Zoe - aren't those notebooks gorgeous? *fans self*

Thanks for all those fabulous photographs! I really wish I could see this, but the deadline is keeping me strapped to my desk.

And notebook heaven! I bought my dd the Moleskine London notebook for her Christmas stocking and she is loving it.

I LOVE notebooks! :D I often struggle to walk past them without picking one up in a shop.