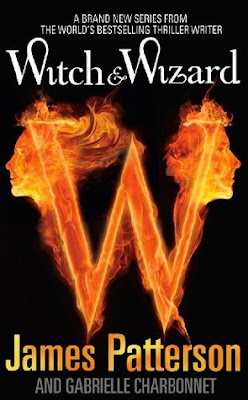 You are holding an urgent and vital narrative that reveals the forbidden truth about our perilous times....
This is the astonishing testimonial of Wisty and Whit Allgood, a sister and brother who were torn from their family in the middle of the night, slammed into prison, and accused of being a witch and a wizard. Thousands of young people have been kidnapped; some have been accused; many others remain missing. Their fate is unknown, and the worst is feared—for the ruling regime will stop at nothing to suppress life and liberty, music and books, art and magic...and the pursuit of being a normal teenager.
I've been sent a copy of the first Witch & Wizard by James Patterson to give away on MFB.  I've not had a chance to read it yet, I'm due to get to it in February, but was wondering if any of you guys would like to win the competition copy?
There's not much to the competition, just leave a comment below and a way for me to contact you - a twitter name works well or the usual coded email address to prevent spammers.  The competition is open to only the UK as I'm paying postage.
I've looked around and found this review for W&W, so go check it out and come back here to enter for a chance to win one.
Who wrote this? Liz at 8:03 am

That's the dream, isn't it? Everyone hopes, deep in their hearts, that they are somehow different, somehow better than their outer self. Powers untapped, gifts undiscovered . . . I remember my brother, way back when he was in short pants, telling me one day he didn't think he could run his fastest. Crazy words, but I knew what he meant.

This book taps into the dream.

From the review it sounds an interesting read, & I love a book containing magic.
@angelsraven

I'd like to enter the competition as it looks like a cool book to read! I'm such a bookworm, and I'm glad I found this blog.
www.onceuponatimeoffashion.blogspot.com
bratzbabebbATlive.co.uk

Sounds like a great book. I'd certainly love to read it.

It sounds like a great read, I'd love to win a copy :)