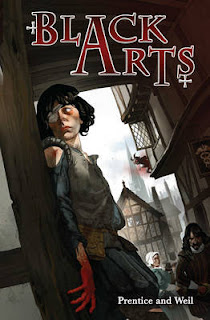 I'm reading this at the moment and I'm loving it. It's out today so I thought I'd share the book trailer with you:

And this is the write-up:
Black Arts
Book I of the Books of Pandemonium
by Prentice and Weil
published by David Fickling Books


Elizabethan London: a teeming city of traders and thieves, courtiers and preachers, riff-raff and quality, cut-throats - and demons. When scrunty Jack the 'Judicious Nipper' picks the wrong pocket at the Globe Theatre, he finds himself mixed up in an altogether more dangerous London than he could have imagined - a city in which magic is real and deadly.

An outbreak of devil-worship has led to a wave of anti-witch fervor whipped up by the Elect, a mysterious group of Puritans recognizable from their red-stained right hands, led by the charismatic Nicholas Webb, a growing power at Court. Rumour has it that he wants to purge the city entirely and build a New Jerusalem. Jack has his own reason for hating him: he saw him kill his mother.

Helped by Beth Sharkwell the Thief Princess of Lambeth, Kit Morely the Intelligencer and Dr Dee the Queen's Wizard, Jack pits himself against Webb's Puritans. But this is no straightforward struggle. Things are not as they seem. In fact, ever since his encounter with Webb, there has been something wrong with Jack's vision. He keeps seeing things. Demons.

Black Arts is the first in a series of thrilling time-travel adventures, each bringing the past to glorious life, as Jack and his companions hurtle from one epic struggle to the next.
Who wrote this? Mark at 7:49 am

I reviewed this recently for Amazon Vine. I loved it too.