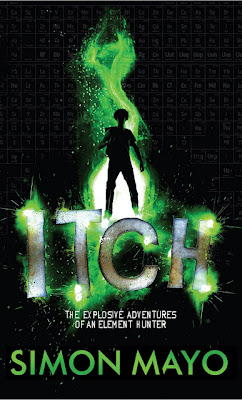 Meet Itch - an accidental, accident-prone hero. Science is his weapon. Elements are his gadgets.


Itchingham Lofte - known as Itch - is fourteen, and loves science - especially chemistry. He's also an element-hunter: he's decided to collect all the elements in the periodic table. Which has some interesting and rather destructive results in his bedroom . . .


Then, Itch makes a discovery. A new element, never seen before. At first no one believes him - but soon, someone hears about the strange new rock and wants it for himself. And Itch is in serious danger . . .


Itch is an unexpected novel in many ways.  When we attended the most recent blogger event at Random House and the editorial department and publicity girls spoke enthusiastically about this title, I was intrigued.  My geeky brain did cartwheels of joy.  I loved the idea of this kid being such a geek that he had a ROCK DEALER.  There was a bit of a vibration in the room as the bloggers realised who the author was: Simon Mayo.  I had no idea who that was, I'm sorry to admit.  They told me he was a famous DJ.  I couldn't care less, all I wanted was the story. Sarah, Darren from Bookzone and I made big exclamation marks on our sheets that we had to find out more about Itch when it came out.  As much as there was a vibration in the room about Simon Mayo having written the book, I could tell there was doubt and I felt it too.

We've become used to being given books to review "written" by celebrities, only to discover that they did not live up to the hype or the merest tenets of storytelling.  However, something told me that I was not going to be disappointed.  Sometimes you just get that feeling.

When it came to reading Itch, I fell for the characters and writing.  The story is mad and fantastical and I loved it.  Itch as a character is superb.  He is so desperate to be this cool surfer guy, but he fails at catching waves.  Instead, he's more than happy to tinker in his bedroom (or the shed his mum banished him to, after he blew his eyebrows off) doing experiments and cataloguing his collection of rocks.  Yes, rocks.  Because Itch collects the various elements from the periodic table.  And of course, there's more to it than just collecting these elements.  Far more than we would have anticipated.

Simon Mayo, who has genuinely written this all by himself (with the imput from various well known scientists and professors and doctors to get all the sciencey bits right), makes Itch's story as he comes into possession of a mysterious rock and the subsequent chaos it creates in his small world, so believable that you literally ache for the poor guy.  Already on edge because of an awful accident at school (he took some arsenic into school and it mixed with the gasses in the greenhouse they were visiting, creating arsine gas which poisoned his entire class, teachers and himself) Itch can't believe it when he realises there is something hinky about this rock his dealer, Cake, handed him.  It stays warm, even when not in the sun.  And when the rock is checked for radiation (not a good thing) it registers practically off the scale.

Things go very wrong from this point forward for Itch, his cousin and best friend Jack (Jacqueline) and his younger sister, Chloe. As the three of them try and figure out what to do with the rock, they discover that Cake is dying from radiation poisoning and that he has several more pieces of rock.  The story takes on a nightmarish hue as Itch's one teacher steals the rock for his own nefarious purposes and honestly, I felt really shocked by some of the stuff that followed - but not in a bad way, but in a "wow, stuff like this is so awful but they can happen" kind of way.

I have to applaud Mr. Mayo for including two very strong female characters in his cast of people to populate Itch.  Jack and Chloe are superb creations and they keep Itch level-headed and help him make informed choices.  They aren't without blame in all these shenanigans, I hasten to add.  The girls aren't goody goody at all, but they do feel very real and I think paired up Itch, they form a fantastic team.

I've probably already said to much about the plot, so I won't go into that further.  What I will say though is that the book is incredibly well written and charming.  It is quite long too, longer than usual fiction for readers of this age, but to be honest, it didn't feel like it.  The story has substance and because you're going through all of this adventure you never stop to think how far you've come reading, only "how the hell do they get out of trouble this time around"?

There is quite a bit of science in the book.  Now, I like my science easy and explainable.  I love Brian Cox and do think Michio Kaku is a god, so I was worried about what I would encounter in Itch.  But we are in safe hands.  Everything science-bitty encountered by Itch and the girls is explained and even when it's not explained, it's inferred. I was thinking how to describe Itch to you guys and to reluctant readers and I came up with something like this: Itch is for kids and adults who like the idea of science and enjoy science fiction movies and books, but who find some of it dull in real life, when we have to sit through classes or lectures.  Itch makes science cool.  He made me go out and read up about the things he's collected and I've decided to actually buy more books on science and chemistry, because my interest was piqued by the discussions in the book.

First and foremost though, Itch is about family and friendship and responsibility.  The science does play a big part in it, but it isn't really the story.

It has literally everything I love in a good book - mystery, action, adventure, genuinely engaging characters and without knowing it, I've learned stuff.  Also, the writing is genuinely good.  How do I explain this without sounding like an idiot?   Sometimes I read books for younger readers and I can tell the author has pitched it for that audience.  Reading Itch felt like I was reading a super-intelligent book that happened to be for younger readers.  The author doesn't talk down to the audience and fully expects the reader to be on board with all the mad things that happen without over explaining things. If Simon Mayo and Itch can make me, at age 39, go buy books about string theory and chaos theory, teachers will have a field day getting kids to read this.  We'll have a new generation of mad scientists on our hands.  Wait, maybe I shouldn't say that?

Itch is out now from Random House / Doubleday and comes highly recommended from Team MFB.
Who wrote this? Liz at 8:04 am

I must admit that when I first heard about this I was a little sceptical, think I'm definitely a little jaded by that whole celeb author thing so I'm really pleased to read such a positive review :) Sounds like this is going to be a real success.

Hehe... Amazed that you didn't nkow who Simon Mayo was! :D

Still, I'm glad Itch is a good read as you never really know with celebrities. Might be another for me to add to my ever-growing list! :)

Haha. I'd never heard of Simon Mayo either and I like Brian Cox. Really liked your review too. I may want this book. Bet it's out on kindle...

This sounds quite interesting! A few blogs I follow have copies of Itch, but this is the first actual review that I've seen of it. I'm very glad that it lives up to the hype, and it's not just another story by a famous person that turns out to be not very good.

I have so many things to read at the moment, but if I do come across this one in the library, I might have to check it out.