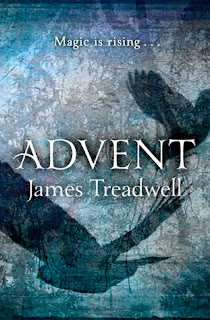 Synopsis
For centuries it has been locked away Lost beneath the sea Warded from earth, air, water, fire, spirits, thought and sight. But now magic is rising to the world once more. And a boy called Gavin, who thinks only that he is a city kid with parents who hate him, and knows only that he sees things no one else will believe, is boarding a train, alone, to Cornwall. When he arrives, there is no one there to meet him.
I was drawn to this book in my local Waterstone's by its beautiful cover and the blurb which reminded me of Susan Cooper's The Dark is Rising series. Gavin is an immensely likeable character although I doubt he'd see himself that way. He's so used to being alone and misunderstood that he turns to a trusted teacher to explain that he's seeing someone that no one else can. Miss Grey has been with him for as long as he can remember but as soon as he talks about it at school his life implodes. Once he gets too old for his, "imaginary friend," even his parents turn against him. So, while they go abroad on holiday, Gavin is on a train to Cornwall to be met by his aunt - although once he arrives she's nowhere to be seen.
I loved the beginning of Advent and the structure of the book. While Gavin's story is obviously in the here-and-now there's another story from the 1500's which starts at a point of crisis and works backwards so that we can see how that character came to be running through the night with a box under his arm. Gavin's journey from confused and isolated teen to a boy who gradually begins to realise that he may not be mad after all is wonderful reading. He meets a whole swathe of interesting characters who neither tell him to grown up or question his sanity. Instead he's accepted instantly as family without question. But there's still the problem of the missing aunt and I have to admit that there's a point, mid-book, that I suddenly got completely lost. I feel now, having finished, that I should have twigged what was going on but if you do read Advent don't lose heart! It does all come together around the time of the snow storm and makes perfect sense.
I think that the mid-book confusion is intentional. In a way the reader becomes Gavin and we get to feel an ounce of his bewilderment - both us and the character have a moment of discovery at the same time. At least, that's what I'm telling myself! From this point onwards the book flies and I was just happy to know what was going on and to watch Gavin grow in confidence and find his true self. This isn't to say that the climax of the book is in any way run of the mill. There are many supernatural side characters that play a great part through the book and I became as attached to Holly and Corbo as I did to Marina and Gavin.
Throughout the book I was touched by how caring Gavin was despite his isolating childhood. Once he gets to Cornwall his true self is unlocked and he's finally able to think and feel for himself. What makes him gain confidence is watching regular members of the public experience the same things that he does which makes him realise that everything his parents told him is wrong; that he needs to grow up, get real, get a life. I think this is one of the messages from the book that I cherished most. I'm looking forward to more from the Advent Trilogy.
Who wrote this? Essjay at 7:30 am

Unfortunately this book went way over my head. I struggled to understand and cursed myself for not getting it. Sigh.

Ive heard so many people saying that this book was confusing and not the best read so Im glad your review has put me back in the mood for it! I will be getting round to reading my copy soon!