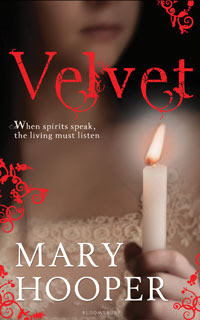 Synopsis
Velvet is an orphan. She struggles to make ends meet by working in a steam, laundry, where the work is back-breaking and exhausting. So when she attracts the attention of the glamorous clairvoyant Madame Savoya, she cannot believe her good fortune.

Raised to the status of lady's maid, Velvet is given elegant clothes to wear and is brought to live in a grand house in London. But the longer she works for Madame Savoya, the more she discovers about the mysterious world of a spiritual medium. Velvet soon realises that her employer is not quite what she seems and that this knowledge could put her very life in danger.
When I think of period books for young adults, Mary Hooper is the author who comes to mind. I love her House of the Magician series and am also a bit of a Victoriana fan so this book has massive appeal for me. Velvet has a tragic background. Her mother was ground into desperation then death by her father who then attempted to do the same to poor Velvet. So when, drunk one night, he tumbles into the canal whilst chasing her she doesn't turn back to help him. Instead she flees her family home with a handful of possessions and attempts to start again. She's lucky enough to find a job at a laundry although it's so hot and steamy that girls regularly fall ill or die. But things start to improve for Velvet and she's promoted to doing laundry for the more upmarket clientele.
One of her clients, medium Madame Savoya, recruits Velvet, immersing her into a very shadowy world. I adored all the historical detail involved with Victorian mediumship that the author included. I was aware that there were all sorts of tricks used but I was still amazed at the scope of them. One of my particular favourites was the ectoplasm scam - you must read the book to get the full story but the whole thing is fascinating. Velvet is such an innocent at the start of the book; drowning in guilt and grief she clings to the new life that the medium offers her. She's so grateful that at first she doesn't notice - and then tries to rationalise - the oddities that take place at Darkling Villa. Stunning George, the assistant to Madame, dazzles her with his good looks and she soon fancies herself in love with him.
But Velvet's past keeps on intruding on the present. There's Charlie who has always held her in high regard, also the mystery of her father just won't go away. I really felt for Velvet throughout. If she decides to turn her back on her new life she isn't just giving up a job but safety and security too. The Victorian age wasn't very forgiving for young, orphaned girls and starving was a real possibility for her. However, as the plot unfolds and Velvet makes more disturbing discoveries she's forced to make difficult decisions and is thrown into terrible danger. I highly recommend this book. It's full of historical oddities with a fast paced plot. I'm embarrassed to say that I haven't read Fallen Grace yet but I'll be putting that right straight away.
Who wrote this? Essjay at 7:30 am

You have to read Fallen Grace! I love the way Mary Hooper writes. I feel like I am getting a history lesson without realising it.