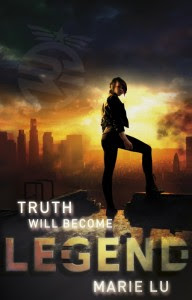 What was once the western United States is now home to the Republic, a nation perpetually at war with its neighbors. Born into an elite family in one of the Republic’s wealthiest districts, fifteen-year-old June is a prodigy being groomed for success in the Republic’s highest military circles. Born into the slums, fifteen-year-old Day is the country’s most wanted criminal. But his motives may not be as malicious as they seem.


From very different worlds, June and Day have no reason to cross paths – until the day June’s brother, Metias, is murdered and Day becomes the prime suspect. Caught in the ultimate game of cat and mouse, Day is in a race for his family’s survival, while June seeks to avenge Metias’s death. But in a shocking turn of events, the two uncover the truth of what has really brought them together, and the sinister lengths their country will go to keep its secrets.

Full of nonstop action, suspense, and romance, this novel is sure to move readers as much as it thrills.

Legend has been on my radar since last year and it is one of the few books I pre-ordered, the other being Katana by Cole Gibsen.

I loved the idea of a retelling of the Robin Hood myth. I loved the elements of Romeo & Juliet too, and how both June and Day learn some vital truths about who they are and how they've been lied to by everyone.

But I get ahead of myself. Dystopia is riding a massive wave at the moment. I've read some and by no means am I an expert on it, but one thing I can tell you about Legend is that I found the world building believable. A lot of dystopias start out with a ceremony our main character has to attend or it takes place in a dome of some sort. In Legend, you have a sprawling metropolis that reminds me of Megacity One in Judge Dredd or the visuals of Bladerunner. The place where people like June live is tidy, clean, immaculate, patrolled by police and the army. The place where people like Day have the misfortune to live is not as pleasant. It is not a nice place, patrols check for various strains of plague and areas are put in quarantine. Citizens disappear and do not reappear.

Each year those of age take the Trial.  June is a prodigy and scored 1500 points.  The fact that she's from a well-thought of family is definitely in her favour.  She's elevated and schooled at the best school and yet it does not stop her from rebelling. She's stubborn, charismatic, intelligent, dedicated and shows a lot of promise and is being groomed to become part of the Republic's military elite.

Initially we know little about Day.  He's touted as a rebel, a bad guy, someone the Republic reviles and a lot of crimes are reported and attributed to him.  What comes as a surprise though is that Day is young.  They are both under 16 and to be honest, I had my doubts about both Day and June being this young, to start off with.  I thought they would be at least sixteen or seventeen or maybe older, and my doubts are that anyone this young (Day) can a) act in such an adult capacity that they become a nuisance to a well equipped and intelligent Republic and b) in the case of June, be elevated to active statues from school student to a military rank, in a military scenario and then allowed to act independently of the rest of the army...There are no checks and measures here, for neither Day or June, and the book felt unbalanced because of this.

Of course, I realise why all these things were put in place, and I genuinely did enjoy Legend and am a big fan, but I could not quite suspend my disbelief overall.  Let me explain why I think they start them this young: because the series will follow them for a few years and starting them out too old will push the books into adult territory.  But also, more than a marketing thing, I think that Legend's two characters are shown to be this young,  allowing us to see how ruthless the Republic can be with her citizens, how age does not matter, how they are prepared to use any tool in their arsenal to scratch the itch that annoys them.

Legend reads fast, the font is different for June and Day so that you know whose chapters you're reading, which again is a good thing as actually June and Day's voices aren't that different when you read it and I think yet again, this is a purposeful ploy by the author.  As we get to know the characters we start seeing more and more similarities between them and of course, there's a reason for this too.  Which I won't spoil for you.

I realise I'm making it sound that I didn't enjoy Legend.  This is wrong.  I genuinely enjoyed it and I will definitely read the other books and I am keen to see what the author comes up with in her other works.  She's started off in a confident way, with strong writing, a great landscape to play with and a rich world to explore.  It's a very cinematic, I'll give you that - and I know a movie-deal is underway.  It has some great core scenes that will translate well into a movie and even into the gaming world.  There are scenes too of utter brutality that genuinely discomforted me and shocked me - and I'd like to think I don't shock easily.  But if they take Legend and cut some of the scenes to fit a 12A audience, it will be a tragedy.  Because those scenes are so integral to the book, I'm already arguing for them to be left in, unchanged.

If I gave this stars out of ten, I'd say it's a six.  Some things didn't work for me, but then I explained above why they didn't work for me.  But please, give Legend a try.  It has a lot going for it and I think Ms. Lu is going to knock our socks off with the rest of the series.
Who wrote this? Liz at 8:00 am

I really enjoyed this - can't wait for the next book.

I really loved this book, more enjoyable than a lot of other dystopians for me. While they are young and the average 15-year old couldn't do the same things, June and Day aren't exactly average. So for me seeing 2 spectacularly brilliant kids pitted against and triumphing over a lot of average people was believable.