Notes of a Russian Sniper by Vassili Zaitsev 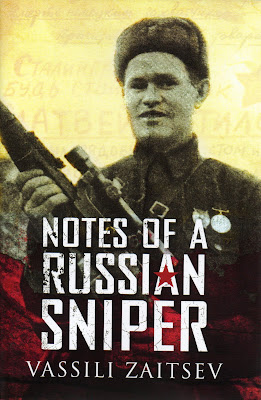 When Vassili Zaitsev arrived in Stalingrad in October 1942 the average life expectancy of a Red Army soldier was only 24 hours. This figure improved gradually during the battle, partly due to the success of a determined group of snipers, the greatest of whom was Zaitsev. He was also one of the lucky ones : he fought at Stalingrad and lived to tell his tale.
I’ve always been mildly obsessed World War II. I was glued to the TV every Sunday as a kid to watch the World at War series; even now the first strains of the title music send a shiver of anticipation down my spine. I grew up reading about it in all forms and watching classic war movies, and if we’d had the History channel or youtube when I was a kid I probably would never have left the house.
The myth of the sniper is something that’s fascinated me for as long as I can remember (possibly because I’m a lousy shot with a rifle) and Zaitsev is right up there amidst sniper royalty, and for good reason. His exploits and writings are studied to this day and still shape the training and mindset of modern operators. I glimpsed the cover during a mid-winter visit to my local Daunt and knew I had to have it because this is Zaitsev’s own account of the battle that made him a legend, rather than some dry study. Told with an engaging honesty and in a way that makes it sound like he’s discussing it over a few friendly drinks, testament to a very good translation. It’s not a story that needs any embellishments- the reality of what they went through, and what they needed to do to survive is awe inspiring as it is horrific. Vibrant and gripping, I found it impossible to put down and finished it in a single session.
The opening chapter is Vassili's recollection of his childhood and is remarkable for how much he downplays the events larger than life characters that shaped him into the man he would become and set the stage for his exploits later in life.
It’s a sure-fire way of ridding yourself of Hollywood’s version of events, and a must read for anyone interested in the War (or even for writers researching urban combat). More than that though, it’s a window into a period that’s rapidly vanishing from living memory and a moving reminder of the price paid for the freedoms we enjoy today.

Vassili Zaitsev talks about one of the clashes he took part in here.
Who wrote this? Mark at 8:00 am