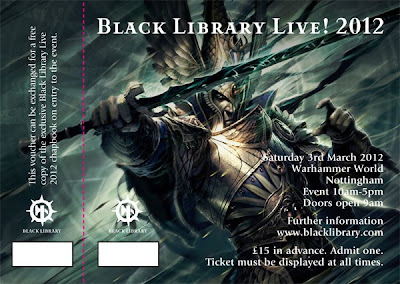 This Saturday past saw Liz and I hurtling northwards to Nottingham, a journey where the greatest danger came not from bandits in trees but mile after mile of traffic cones on the M1 (apparently putting cones on the hard-shoulder constitutes roadworks these days, and is considered traumatic enough to warrant a 50 mph speed limit). Despite the best attempts of the Highways Agency, we arrived at Warhammer World with about 15 minutes to spare before the doors opened.
We met up with fellow BL fan Amanda Rutter and joined the queue of chilly but enthusiastic attendees and were soon shuffling through the doors under the baleful gaze of Lurtz. We collected our programmes and Chapbooks from Andy Smillie, who was on door duty (what the hell do they feed them up there?) and headed upstairs to the castle themed main hall, which had been split into the usual gaming hall and a space for the heavily laden tables of Black Library goodies on sale and the signing tables. I left Liz to collect (free) tickets for the panels we wanted to attend while I ducked into the sale area to rifle through the stacks of cool stuff that were on sale. Limited edition art prints vied for space with pre-release titles, limited edition novellas and several titles that were normally restricted to the Print-on-Demand section of the BL website. I picked up a very modest three items, but I was certainly the exception to the rule- most of the people around me were walking around with armfuls of stuff, their eyes glazed in satisfaction.
I quickly stashed the books in the boot of the car and topped up my caffeine levels with a surprisingly good coffee in Bugman’s before we headed to the first panel. Liz and Amanda headed off to the “Writing for Black Library” while I took a seat for “Space Marines”, which was headed by Gav Thorpe (who had quite a full day: he was everywhere) It was a bit of a broad description but, as it turned out, it was a discussion about understanding what made Space Marines tick, and the issues of who, and what, they were, elements which are key in writing them well and ensuring readers could connect with them without diluting the same.
We all met up for the next panel, this one on the Warhammer fantasy setting, this one again helmed by Gav Thorpe, the focus turning to what sets it apart as a fantasy world and why those traits work so well. The discussion ranged from the decline of the Dwarven empire, the classical origins of the elves and the level of despair felt by your average Imperial commoner. It was a good one, and left me wanting to do do nothing more than go grab a pint and settle down with the newly released Gotrek and Felix anthology.
We decided it was a good time for lunch, and after some crafty hovering-with-intent, we managed to snag a table in Bugman’s, which was proving as popular as ever thanks to the reasonably priced plate bending portion sizes and the sheer geektastic pleasure of sitting and having a drink in a place with a dwarven anvil over the fireplace and a mounted Ork’s head sharing the wall-space with enormous canvas maps and banners. Then it was off to a talk about Xenos in 40K, covering such things as the difficulties in writing from an alien’s perspective (and how to get around it), whether Tau were naive or manipulative gits with a darker agenda and pointers about their upcoming submissions window.
A quick break followed before we filed into the very popular panel about the Horus Heresy series, helmed by Christian Dunn and populated by HH stalwart Graham McNeill, Nick Kyme, Rob Sanders and Gav Thorpe. This was largely a Q&A session, and for me the most thrilling moment was Dunn’s reply to the question of whether there were plans afoot to expand the HH into media beyond books and audio dramas – there will be an announcement on this at the Black Library Weekender. For the rest, I was pleased to hear that there were loads of new projects in the offing, including books for the White Scars and the Salamanders. It was interesting to hear how carefully the series is being orchestrated behind the scenes and while it’s frustrating knowing that the final confrontation is years away, it’s simultaneously comforting to know that there are dozens more of these cracking novels ahead.
I left the others in Bugman’s afterwards to spend more time poring over the goodies for sale and admiring the display cases of armies and mock-up models. I also bought some tickets for the raffle to win some of their amazing posters but sadly my luck wasn’t in. Mind you, I’m not really sure what I would have done with a 12 x 6 foot poster at home, but hey, it would’ve been a nice problem to have though!
We said our farewells soon after and began the long drive home, with most of the time spent in rambling conversations about Space Marine psychology and the perils of Warp travel, an awesome side effect of being immersed in such a vibrant, friendly and shamelessly enthusiastic atmosphere. Top marks to the Black Library & Warhammer World crews!
And yes, I’ve already bought tickets for next year.

You can find out more about the Black Library and the Weekender here.
Who wrote this? Mark at 8:00 am

Great write up, sounds like a really good event.