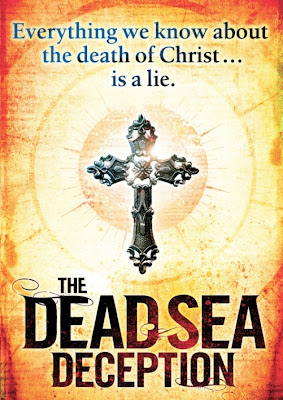 Hidden in the Dead Sea scrolls - the secret of how Christ really died.


As ex-mercenary Leo Tillman and ambitious cop Heather Kennedy investigate a series of baffling deaths, the trail leads them to the Dead Sea Scrolls - and the deadly gospel hidden within them. But soon Tillman and Kennedy are running for their lives from a band of sinister assassins who weep tears of blood and believe themselves descended from Judas. These 'fallen angels' will stop at nothing to expose the world-changing secret of the Scrolls . . . the secret of how Christ really died. Rocketing from a spectacular plane crash in the American desert to a brutal murder at a London university to a phantom city in Mexico, The Dead Sea Deception is the most gripping, revelatory thriller since The Da Vinci Code.

Although the conceit in The Dead Sea Deception is a clever one and hugely entertaining and it drives the story forward in a fun and audacious way, what lifts TDSD head and shoulders above its peers and leaves them far behind, is its ace characterisations.

In Tillman we have a damaged hero.  He's deeply flawed and rather than being a paladin of virtue who stands in the light, we realise he's muddy and shady and splattered.  His story is the story that drives TDSD so I won't explain to you about that, but I will say that Tillman's a deeply layered character, who knows full well that this quest of his to uncover the truth is setting the entire world against him.  He is so single-minded that it is frightening but, interestingly, he's not blinkered.  He knows exactly what he's doing, that he's burning his bridges, and yet he doesn't care, because he has this driving force to find the things that were taken from him all those years ago.

On the other hand we have Heather Kennedy.  Not quite the sweet-smelling cop we'd like, or so we initially think.  Kennedy is tough, independent, highly intelligent and she is very much the paladin.  White is white, black is black.  She sees her world this way - her world is strictly regimented in order for her to keep control.  She faces down her entire section and chief for her strong belief in doing the right thing and it ostracises her from her colleagues, yet she does not let up.  She holds her head high and she does what needs to be done.  It's not for some time that we find out why she is the way she is, what makes her tick, what makes her hold the moral high-ground, and once that's revealed, your opinion of her doesn't really shift.  You sit back in your chair and you think bloody hell, this girl is incredible.  And you love her to bits for it.

As Kennedy and Tillman meet and a reluctant partnership forms, their contrasting characters are highlighted by personality clashes but it is obvious that they compliment each other so well.  The one walks within the law and the other one skips on either side of it.  Both of them are stubborn, determined, and a bit pig-headed.

As they follow up a variety of murders that are initially thought to be standard deaths, a pattern emerges and at the heart of this pattern lies an ancient manuscript from the original horde discovered in 1947.  Initially it makes no sense.  The manuscript's been translated a hundred times, examined by experts, prodded, analysed and discarded as not all that important.  Yet there is something about this manuscript that is worth killing for.

As they start putting the puzzle together other things and clues start slotting together, revealing the bigger picture and as they realise what the impact of their discovery could mean, things fall apart completely.

I have to say, it is rare for me to be surprised when it comes to thrillers.  Or to really identify with the characters as much as this.  In the case of The Dead Sea Deception, each reveal left me grinning and nodding and going "yes, yes" as I could utterly believe the conceits I was being told and shown.

The depth of research is staggering.  You have the idea that the pseudonymous author Adam Blake spent a long time poring over very old manuscripts and doing a lot of research and talking to a variety of scholars and military experts.   But even so, because he has to show us a lot of things and explain to us a lot of things, it works within the context of the novel because neither of our main characters knows anything about this world they find themselves in, and we utterly have to rely on what they are being told.  We basically become Kennedy and Tillman - albeit a bit more passive and rubbish with weapons - as they are witness to a nightmare world unfolding around them.

I also liked that we are shown, quite adequately, this hidden society that is pulling the strings behind the scenes.  We don't know everything about them, but we learn a few things which help the story move forward, and naturally Tillman's discoveries of answers to some of his questions leave you gaping like a fish.  Adam Blake is an audacious writer. He pulls no punches and dumps us into a mad world of secrets, crazy action and devious assassins and expects us to keep up.  And if we do, the payback is a story very well told indeed.

I highly recommend The Dead Sea Deception.  It's been out for a while now from Sphere but it only recently came to my attention, hence my immediate purchase and subsequent devouring of it.  I've also pre-ordered the follow-up novel called The Demon Code out in August.
Who wrote this? Liz at 7:56 am