Talina in the Tower by Michelle Lovric 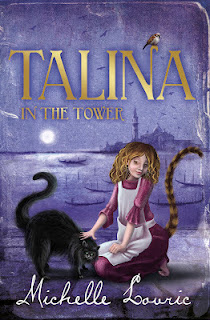 Synopsis
Magic is attracted to Talina, and Talina is attracted to magic, with startling results ...
Talina in the Tower is the tale of a girl who is more passionate than she is careful. Talina Molin, the daughter of an archivist, has earned herself the reputation of being the most impudent girl in Venice. When she's not campaigning for egrets' rights, or terrorizing the school librarian, Talina adores reading, cooking and magic. When she mixes all three together, she cooks up more than she had bargained for.

The story takes place in a sinister late nineteenth-century Venice, one inhabited not just by frightened people but also by ferocious foul-mouthed tomcats, argumentative rats and evil vultures.
I'm a bit embarrassed that this is my first Michelle Lovric book despite the fact that I have loved the look of them and thought that each one sounds fascinating. I've finally put this right and have to say that I had an idea in my head of how Talina would read and I was both right - and wrong. I mean, I expected it to be a Venetian fairy story full of magic, and it is but there's a lot more to Talina than this. I wasn't expecting the book to be so funny, so full of horror and to be so innovative. The heroine was a surprise to me too. I thought she'd be resourceful and fearless and she was but she was also foolish and at times infuriating. But she also has a huge heart and is charming, a true flawed heroine.
Talina's parents are kidnapped by unknown creatures which are haunting the streets of Venice. As a result Talina has to stay with her benefactor (a writer of books which are full of children who meet unfortunate ends) in a tower with vicious dogs. However, Talina's life takes a very unexpected turn and she finds herself transformed into a cat. Fortunately, help is at hand and there's a whole host of wonderful secondary characters to help her. I loved the eccentric Professor who comes to her rescue and Talina's friend and admirer, Ambrogio. Talina and her friends are very resourceful which is just as well as the antagonists in the book are totally blood thirsty and disgusting. There were some passages that really made me cringe. I felt as worried for the people of Venice as I did for Talina and I was willing her to find a way to succeed.
There's brilliant magic throughout this book that made me constantly wonder what was going to happen next. I was very fond of the idea of Thaumaturgic Tea Towels that can be ridden like magic carpets but if damaged can be torn into four and reform themselves and can also be a great handkerchief if needed. I also loved the island of grandmothers and their cats who all adore Talina and watch out for her when they can. Magic is interwoven through the pages in such a way that it's entirely natural but also wonderfully surprising too. Later in the book there's a court case and everything about it made me smile. The jury and onlookers are all manner of people, creatures and the paranormal. You really couldn't ask for more from a book.
I can't recommend this book highly enough. I think it would appeal as much to boys as well as girls as it has plenty of gore alongside the magical to keep everyone happy. I'm definitely going to read Michelle's other books based in Venice too.
Who wrote this? Essjay at 7:30 am

So glad to read you loved it too. I am beginning to think we have very similar tastes Sarah. I have just managed to get hold of The Undrowned Child and The Mourning Emporium, both of which I can't wait to read.

We do! I'm going to get a hardback copy of The Mourning Emporium while it's still available to complete my set.

This sounds so good! I wasn't sold on it from the synopsis (think it's the historical thing) but you've definitely convinced me to give it a go.

Yes, boys should love this book as well. At least I did (my review went live yesterday coincidentally). I also just ordered a hardback of The Undrowned Child to complete my collection :-) I am determined to get some boys at school reading it.

I read your great review and you're so right about the covers being quite feminine! I love them but can understand why the boys at school aren't keen to be seen carrying them around :-) It's a shame because I think you're right - they'd enjoy them.

Jenni - definitely give them a go. The historical setting isn't at the forefront :)

Oh, yes, I add my enthusiasm to yours: this book is great fun! And who could resist a heroine who can read two books at once?

My 11yo started it but couldnt get into it. She is more into gritty contemp I think.
She has handed it to the 9yo who I think is absolutely going to adore it after reading your review.
Thank you <3