The Summer of Living Dangerously by Julie Cohen 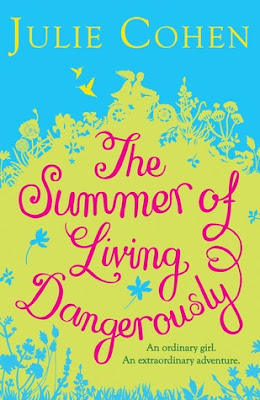 Alice Woodstock has her life under control. She's successful and she's happy - as long as she continues to ignore the hurt from her past. But when said past walks back into her life in the shape of Leo - the man she married too young, ran away to Paris with and who ultimately broke her heart - Alice is desperate for an escape route. She finds the perfect thing - a new job as a tour guide in a Regency stately home. But as she immerses herself in acting out the stories of the house, Alice begins to see parallels with her own life, forcing her to confront her feelings about what she wants and, finally, live in the real world.

As readers of MFB should know by now, I'm not good with reading contemporary female fiction, but I am a huge fan of Julie Cohen's because her stories manages to not alienate me. Within a few pages, I'm utterly immersed in her main character's life and you use every inch of your being to will her to come out on the other side, with a smile and a gorgeous man on her arm.

It's no different in TSOLD. Alice is a bit of a recluse, working on her articles for technical magazines at all hours of the day. She's not good with people, and a good night for her is crawling onto the couch with a good book. Her mum is lovely, but talks and talks and talks, literally non-stop. Her dad is quiet, builds his puzzles and susses the world out from behind quiet eyes. Her sister, Pippi is constantly in a strop and full of raging teenage hormones and is as foreign to Alice as dressing up and going out. Her best friend Liv is getting married and moving away to New Zealand start a new life with her husband and Alice is feeling dejected and miserable, more so than usual.

But it is when a leaflet is delivered promoting the opening of the local stately home to the public that things go both right and awry in Alice's life. She comes up with a mad idea to write an article for a London glossy mag about Eversley Hall, the stately home and much to her surprise, the glossy magazine's editor loves the idea.

Alice heads off to meet the owner of the stately home and within a short space of time, she's offered a role at the house. The home has been restored to its glory from 1814 and the owner, James, had hired skilled actors to work at the house, taking roles as his ancestors but also as the servants who had lived there at that time. Alice jumps at the mad chance to work there, envisioning herself as a grand lady, swanning about in beautiful clothes. However, the role she is offered is that of a lowly kitchen maid but she's so intrigued by it all, she decides to take on the role as research for her article.

Things evolve from there, with her role changing at the stately home from maid to long-lost cousin when James realises Alice is an intriguing and fun person to have around. She follows the script he's set out for everyone but she's quite good at thinking on her feet. Tied in with her new role at the house, she has to cope with her ex-husband, Leo, turning up for Liv's wedding. Alice was sort-of prepared for this eventuality; Liv and Leo are brother and sister after-all but what she's not prepared for is Leo moving into the house she used to share with Liv. And he shows no inclination of moving out either.

Things are complicated by the fact that Alice would far rather live in 1814 as it is far easier to deal with the realities of back then, rather than face her own life. The one good thing that comes from working at the stately home is that she makes friends with the local actors who are working at the house too. She realises just exactly how isolated her life had become, living and writing in the attic till all hours of the night and day. She finds that she enjoys being out with these people, that she is good at talking and laughing. I think that the author shows us through Alice how easy it is to shut out the real world, how easy it is to revel in being solitary and miserable. As Alice finds her feet again, she starts growing more confident and her writing on the magazine's blog shows this. She's deeply funny and soon droves of young women decide to visit Eversley Hall to see who all the characters are that she's writing about, but also about the mysterious owner, James Fitzwilliam whom Alice is slightly in love with.

I have to say, no one writes relationships the way Julie Cohen does. She's not heavy-handed and obvious when she introduces characters. With a few deft turns of phrase she brings secondary characters to life and they stay that way, you know they have lives off the page and aren't there to make the main character look good. And Alice is complex and flawed and charming and funny and one of my favourite characters I've read this year, I'll freely admit. With Leo we have a great flawed hero, full of hang-ups and moods and yet you feel it in your bones that Alice and Leo are meant to be together. Even if Alice refuses to give him the time of day. Their relationship is a difficult one, full of layers that encompass a world of hurt and love. I loved finding out how their story fit together and I tell you, I was reading this when I wasn't feeling remotely well, so I blame my consumption of three pots of tea and working my way through a box of tissues on my illness, rather than sobbing into the pages of my now rather tatty book.

It is a big book, chunky in size, but it didn't feel like it because the writing really does just lift you and carry you off. Take it from someone who spent the entire day on the bed / couch whilst sick with a truly horrific cold: if I can forget about my exploding face and be immersed in Alice's world and fall in love with both James and Leo, the chances are you will easily fall for the whole package too.

Do check out Julie's website and her blog - especially if you are an aspiring writer. Her blogposts are very interesting and full of great advice on plotting, planning, revising, character creation etc. And here is a taster fromThe Summer of Living Dangerously.
Who wrote this? Liz at 8:14 am

Thanks for this great review.

I'm also a fan of Julie Cohen's romances, they always manage to grab my interest completely. I plan to get her new book soon and hope that I will enjoy it as much as you did.

Fab review, I haven't read anything by Julie Cohen - sounds like she could be the one to break my bad run of contemporary female fiction.

This a great review of what sounds like a really compelling story!