Eye of the Tempest by Nicole Peeler 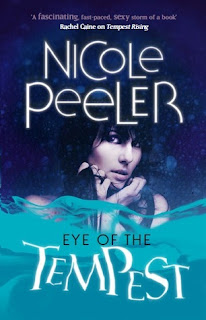 SPOILERS FOR PREVIOUS BOOKS IN THE SERIES
Synopsis

Nothing says "home" like being attacked by humans with very large guns, as Jane and Anyan discover when they arrive in Rockabill. These are professionals, brought into kill, and they bring Anyan down before either Jane or the barghest can react. Seeing Anyan fall awakens a terrible power within Jane, and she nearly destroys herself taking out their attackers.

Jane wakes, weeks later, to discover that she's not the only thing that's been stirring. Something underneath Rockabill is coming to life: something ancient, something powerful, and something that just might destroy the world.

Jane and her friends must act, striking out on a quest that only Jane can finish. For whatever lurks beneath the Old Sow must be stopped...and Jane's just the halfling for the job.
I love Jane True. The Tempest series is the only adult paranormal that I keep up with apart from Sookie Stackhouse and they both have a similar appeal for me; home loving girls who are swept up into a fantasy world without losing their down-to-earth roots. This book read a little like the start of a new trilogy to me as now Jane is fully aware of her powers, has been training and is less likely to roll over and let someone get the better of her. I'm also loving the fact that Ryu is well and truly off the scene in this book which means more Anyan - yay!
Back in Rockabill, Jane is hoping for a little time to recharge her batteries after the dramatic events of Tempest's Legacy. Unfortunately, Jane doesn't get her wish and it becomes obvious that something is a bit … off in the small town. I was happy to see her reunited with her home crowd and the places where we first met her. The mysterious, tattooed being that has been tracing Jane's steps comes to the fore in this book and I found her an interesting addition to the series. Jane's more street wise and confident now and I love this side of her. She knows her own mind and what she wants although she hasn't forgotten the experiences that formed her. This is a powerful combination and her development as a character is wonderfully done. There's a whole tonne of myth and world building in Eye of the Tempest which was fascinating.
As ever in the Tempest books there's plenty of drama, sex and humour. I think it's this combination which makes the series a winner for me. Jane has given me a new favourite swearword (you'll just have to check out the series to find out what that is) and amused me. Each book is tightly plotted, fast-moving and full of drama too - I really couldn't ask for much more from an adult paranormal series. Tracking the Tempest lived up to my expectations. I'm more than ready for the next in the series!
Who wrote this? Essjay at 7:30 am

Email ThisBlogThis!Share to TwitterShare to FacebookShare to Pinterest
Labels: eye of the tempest, nicole peeler, orbit