As per my usual want, I've saved up a stack of Barrington Stoke reviews to blast you with. The selection I recently received is superb. Some great titles from a lot of well known authors and as usual, the stories are well written and they make you want to sit down and re-read them again and discuss them with someone. 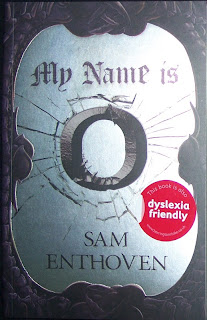 First up is My Name is O by Sam Enthoven. We are big fan of Sam's writing, even if we think he has a very scary twisty brain that gives us books like Crawlers. My Name is O is a high concept action thriller, possibly set in the now, possibly slightly in the future. The writing is easy on the eye, the reader is never patronised, and most of all, it is a great story done well.

We meet O standing on top of Tower 42, just before she flings herself off the side of the building. It makes a great impact, and it's shocking and a great opening sequence, and I loved the fact that this mad stunt leads up to breaking into the Bank of England! Soon we learn who O is, and in fact, I call O "her" because there is one scene where she is indeed a girl, but to be fair, she could be a boy or a girl, because O is a Blank and can be whatever the overlords want her to be.

It's a rare writer who can dump us in a world that is familiar enough, yet strange enough, and not alienate the reader. Doing this in a book as slender as My Name is O is positively genius. Add to that, everything that happens, including a set of great reveals about O and who the overlords are and O's subsequent actions and well, I will say this: I want to know more about O and I want a whole series about O, the consequences, what she gets up to next, all of it! In fact, I'd like a TV show about My Name Is O. But in the meantime, I'll have to keep re-reading the book. Well done, crafty twisty Sam Enthoven, you've made me want to write fan-fiction.

My Name is O is out now and is a dyslexia friendly title. 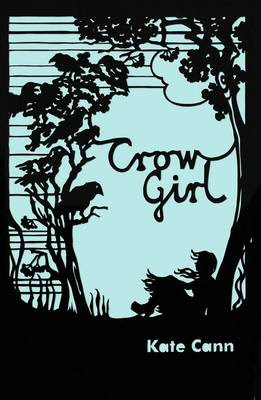 The Crow Girl by Kate Cann - this is a reissue of this very popular title.  It follows the story of Lily Stanfield, an outsider, a freak, a weirdo.  Not that she sees herself as this.  These are names that she's called by her classmates and others in her school.  Lily is just a super quiet girl who likes reading.  She's interested in other stuff than most of the superficial appearing girls seem to be interested in.  She's been badly bullied, called names...basically, bad things have happened to her.  Yet the real extent is never really revealed.  Lily finds solace in an unexpected place - the nearby forest.  It becomes a magical place, a place where she can pull her shoulders back and relax and breathe.  One of the coolest things though is that she makes friends with the local crows in the park.  They follow her during her wanderings and she feeds them snacks.  And slowly but surely, Lily starts blossoming.  She loses weight, her Nan takes her shopping for a decent bra.  Suddenly she's not this weird misshapen girl with weird lumps and bits.  Her Nan tells her to walk proud, lift her head, keep her shoulders back.  Lily likes what she sees, but she's not confident yet.  And it's only when she's asked along to a party, that she thinks about a clever trick to get people to notice her.  It involves her crows, black feathery wings, a beautiful Gothic dress, hair dye and cool make-up.

And she pulls it off.  Wonderfully so, and what I like about this story is how Lily discovers herself at the same time she tries to put on a new face for the world.  It's not about the dress, the hair dye or the make-up or the trick she pulls, but this slow realisation that she is really as cool as any of the cool kids in school and that she too can walk with her head high.

It's a great read and very girl-affirmative.  The whole bra-shopping experience was too funny and painfully real.  But even though there is mention of girly shopping, the story is pretty inclusive and boys will take a lot away with them reading this.  It's all about self-realisation and coming to grips with the fact that it's okay to be yourself and to believe in yourself. 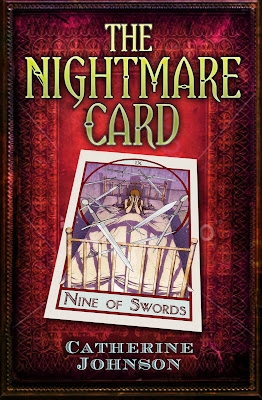 The Nightmare Card by Catherine Johnson freaked me out.  The story is told retrospectively by Mina.  We learn that her best mate Sara found a pack of tarot cards and decided it would be fun to mess around with them and tell fake fortunes to friends at school.  It starts off innocently enough, but soon we sense a change in Sara.  She behaves strangely and distances herself from Mina.   Her appearance changes and it looks like she doesn't sleep at all.  The story is short, sharp, frightening.  Nothing is actually explained in so many words, but by using the images in the cards, the author shows us what's happened to Sara and it's not at all pleasant.

It's a story of loss and caution - don't mess with things you don't understand.  And the reason it freaked me out is that I love tarot cards, I have several decks of my own and I love shuffling them, playing with them but I hardly ever venture to tell fortunes with them.  I like them for the archetypes they represent but this story has made me feel a bit itchy under the skin.  So thanks, Catherine Johnson!

Both Crow Girl and The Nightmare Card is dyslexia friendly titles. 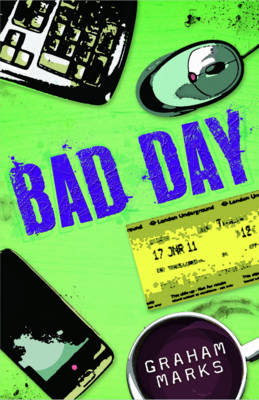 Bad Day by Graham Marks is all about a teen boy called Rob who manages to almost screw up in a big way.  I liked this story - it made me grin as I can really imagine something like this happening.  Rob has met a girl online and they've agreed to meet.  So he's managed to get ready and slip out of the house and get into London without much trouble.  But it's when he's waiting to meet his friend Tessa that things go wrong.  A scurvy looking man tries to to actually pick him up and Rob gets questioned about the police and he's embarrassed and livid because it looks like Tessa's stood him up.  In a huff he gets home and signs in on his computer and writes a wild angry email to Tessa which he doesn't - LUCKILY - not send.  Whilst he's online, Tessa comes online and well, things are made clear.  It is well written and goes to great lengths to show us what a worrier Rob is, how he second guesses himself, and how anxious that makes him.  It also shows us how silly our preconceptions sometimes can be but how we should listen to our gut instincts and not do something stupid.

This is also a dyslexia friendly title.
Who wrote this? Liz at 7:58 am

They sound great! (Although I can't stand crows so may have to give The Crow Girl a miss even though it sounds very cool...)

these sound amazing, Ive never read a Barrington Stoke books but I might have to try some! I love the sound of The Crow Girl!