The Pack by Jason Starr 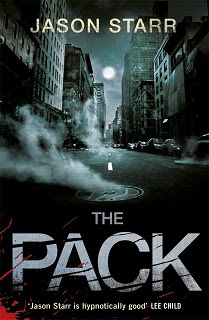 When Simon Burns is fired from his job without warning, he takes on the role of stay-at-home dad for his three-year-old son. But his reluctance pushes his already strained marriage to the limit. In the nestled playgrounds of the Upper West Side, Simon harbors a simmering rage at his boss's betrayal. Things take a turn when he meets a tight-knit trio of dads at the playground. They are different from other men Simon has met, stronger and more confident, more at ease with the darker side of life-and soon Simon is lured into their mix. But after a guys' night out gets frighteningly out of hand, Simon feels himself sliding into a new nightmarish reality.

I am very conflicted about The Pack.

I enjoyed it, some bits I had issues with, and it also freaked me out a little. Starr has gone all Stephen King basically - taken an utterly Normal Joe off the road and screwed over his life so much that in the end, you just want it to stop, to give the guy a break!

I enjoyed the writing - it's fast paced, cinematic and gives you a great sense of moving forward, towards that inevitable conclusion when the fit hits the shan, as it inevitably must and does with extreme relish and gore.

It's obvious from the title that the book is about a group of people who are a pack.  We see Simon's three new friends as he does, an outsider looking in.  They are easy to get along with, completely focussed on their kids and seem like genuinely nice guys.  But it's hints that Starr dots throughout the book, the foreshadowings that make your skin crawl and you find yourself willing Simon to walk the hell away from this crazy bunch of guys.

Sadly, he does not.  And things go both right and wrong for him in equal measure.  His marriage is going through a rocky patch and counselling seems the only answer.  His wife resents him staying at home, he can't get a hang of being a stay at home dad and then there's that part where he woke up in the middle of the night, miles and miles away from home, naked, in a wooded area.  Oh, and that his old boss got his throat ripped out by a wolf or dog of some sort.  But the sex with his wife is suddenly great, so it's all okay.

I'd like to say that I warmed to Simon, or to any of the characters in the book, but I didn't.  Although I can see exactly where Simon was coming from, how hard things were for him, losing his job and having to become his son's primary carer, I felt "meh".  I didn't identify with his wife or any of the other two women in the book either.  I was intrigued by the pack though, by their leader, Michael.  He is exceptionally well written and makes for an interesting protagonist.

The Pack is raw and sex-fueled writing.  It's aimed at readers who like their urban fantasy stronger than Jim Butcher and Kevin Hearne's offerings.  I hasten to point out that although the sex scenes aren't really described, it's mentioned often and we get treated to Simon's attraction to his wife, complete with "husband bulge" moments (as they call it in Cabin in the Woods) which, instead of helping with the narrative is distracting and a big gross.  I enjoy a bit of friskiness in my urban fantasy but yeah...more sexy times and less that.

I digress - The Pack is a cross between hard nosed very man-orientated crime novels from the Spillane era and harder edged urban fantasy.  I enjoyed it, liked the pacing, and it is really well plotted, I just wish I liked the characters more.  Having said that, I am sure you're thinking this write-up is a bit strange - I apologise - but I will definitely want to read the other novels in this series as I am intrigued and I want to know what happens to Simon! So maybe, in the end, I did care about the main character?

Find Jason Starr's website here.  With thanks to Berkeley UK for sending me a copy of this to review.
Who wrote this? Liz at 7:30 am

Lol, so much s*x around these days! Though 'husband bulge' really did make me giggle.
Not sure this one is for me, but fab review.