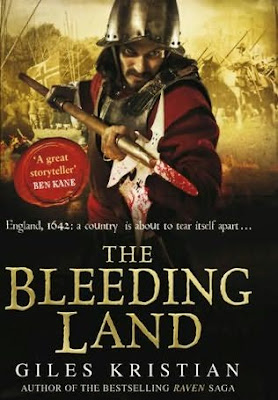 We are so pleased to be able to host the exclusive trailer for Giles Kristian's new title: The Bleeding Land.  Doesn't it look great?

Mark has finished reading the book - like I had any chance getting near it once he put his claim on it - and says it is a stonking read.  He read it in two sittings.  That says a helluva lot.

Enough chatter from me - here's the trailer!


The description about the book reads:


England is at war with itself. King Charles and Parliament each gather soldiers to their banners. Across the land men prepare to fight for their religious and political ideals. Civil war has begun.

The Rivers are landed gentry, and tradition dictates that their allegiance is to the King. Sir Francis' loyalty to the crown and his desire to protect his family will test them all. As the men march to war, so the women are left to defend their home against a ruthless enemy. Just as Edmund, the eldest of Sir Francis' sons, will do his duty, so his brother Tom will turn his back on all he once believed in...

A war that will change everything.

From the raising of the King's Standard at Nottingham to the butchery and blood of Edgehill, Edmund and Tom Rivers will each learn of honour, sacrifice, hatred and betrayal as they follow their chosen paths through this most savage of wars.
Who wrote this? Liz at 11:21 am

Definitely not just one for the boys though, this one (despite the cover). Thanks for posting, Liz. I hope readers like the trailer - we certainly had fun with all that gunpowder! (Don't try this at home, kids ;)
G. Kristian