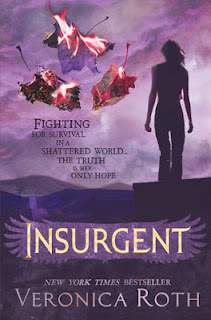 In a run-up to the release for Veronica Roth's Insurgent (sequel to Divergent) I sat and thought how MFB could do something different to celebrate the book's release.  We've had people come up with some great things but because I like weaponry and grew up handling guns and things, I thought we could do something about weapons that are used in Divergent.  And because guns aren't really allowed in the UK I had to cast a wider net.

I spoke to Mark and he in turn spoke to his tutor Dave Rawlings of the Boar's Tooth Fightschool who was more than happy to throw Mark around on a Sunday afternoon, to show us some of the skills Tris would have learned during her training as she became Dauntless.

We hope you guys like the video and the music is of course from one of my favourite movies of all time, The Crow.

Remind me never to piss either of you off. OMG!

Awesome post - although wasn't Mark feeling a little bruised by the end?!

this is so badass! thanks for sharing!

it took me so long to read this post and watch the video, sorry! but wow! awesome. I hope Mark wasnt hurting too badly after it!