It's been a long time since I bought a book by an author and fell so irrevocably in love with the writing and voice that I was halfway through the first book and went and bought the rest of the books in the series as they now stand.  And then, after finishing the first, I read the next two cover to cover, back to back.  And it left me wanting more in a desperate way.

The three books I'm talking about are Ilona Andrews Edge titles - On the Edge, Bayou Moon and Fate's Edge.

Read on below the cut for a write up on all three titles.

These books came to my attention through Kaz Mahoney making a random throwaway comment on Twitter about how perfect the world-building is.  This intrigued me.  Kaz reads a LOT of urban fantasy and she knows of what she speaks. So, taking her on her word, I bought On The Edge and did not expect to fall in love as much as I did.

Ilona Andrews (writing partners Ilona and Gordon) is probably more famous for their Kate Daniels titles which I admit I've not yet read, although I do own them.  I fully expect that they are great titles, but for me, right now the Edge books is where it's all at.

A general idea for the series is as follows:

The Edge lies between worlds, on the border between the Broken, where people shop at Wal-Mart and magic is a fairy tale—and the Weird, where blueblood aristocrats rule, changelings roam, and the strength of your magic can change your destiny…

So, onto my snippet reviews: 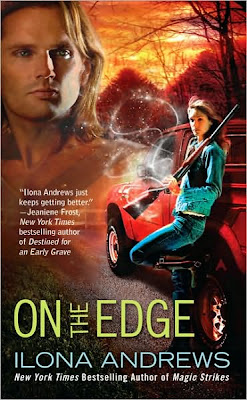 Rose Drayton lives on the Edge, between the world of the Broken (where people drive cars, shop at Wal-Mart, and magic is a fairy tale) and the Weird (where blueblood aristocrats rule, changelings roam, and the strength of your magic can change your destiny). Only Edgers like Rose can easily travel from one world to the next, but they never truly belong in either.


Rose thought if she practiced her magic, she could build a better life for herself. But things didn’t turn out how she planned, and now she works a minimum wage, off the books job in the Broken just to survive. Then Declan Camarine, a blueblood noble straight out of the deepest part of the Weird, comes into her life, determined to have her (and her power).


But when a terrible danger invades the Edge from the Weird, a flood of creatures hungry for magic, Declan and Rose must work together to destroy them—or they’ll devour the Edge and everyone in it.


This is the first of the series and in it we meet Rose Drayton who lives in The Edge with her two younger brothers, Georgie and Jack.  Oh my days, just trying to write this review makes me want to go back and re-read these books! Rose is such a great character.  She is very poor and she is worried about looking after her two brothers.  She has a job that pays minimum wage or less, in the Broken (our world, it has no magic so it's broken, get it?) but even so, it's difficult to make ends meet.  There is something going on with Georgie though, he reanimates dead things, and by keeping them alive, they are draining him of his own life force.  With Jack, well Jack is a shifter, and wild.  Younger than Georgie he's the fighter and he goes into frenzies protecting his older brother who easily becomes the victim to bullies at the local school.

When a young man, a blueblood turns up in The Edge and declares that he is prepared to fulfil three tasks in order to win her hand, Rose wants to run.  She doesn't need this crap in her life.  Ever since she revealed her magic ability and what she could do with it, she'd been hunted, abducted, beaten and fought over.  It was not the life she envisioned for herself.

Rose's life is complicated and full of worries.  Yet she has this innate pride in who she is, in what she does and in her family.  I fell for Rose and loved her to smithereens.  Slowly but surely we are introduced to the world Rose inhabits.  We are made easy with the magics and the different realms are explained.  It all leads to us realising that there is something Declan isn't telling us.  The wild creatures that stalk the lands and the forest aren't there by accident.  There is something crazy going on and Rose and the boys' lives are in severe danger.  But rather than running and hiding, Rose stands her ground and forms an uneasy alliance with Declan and it is so interesting to watch their relationship grow and their attraction to each other solidify into something that is lovely and deep and also a bit funny and very charming.  Declan sounds utterly gorgeous and his fascination with Rose is easy to read.  The romance is kept low key but hot, and it is sizzlingly hot when it does happen and what I liked is how the writer(s) give us what we want without it turning pornographic.  The way the story wraps up works really well and I loved it. 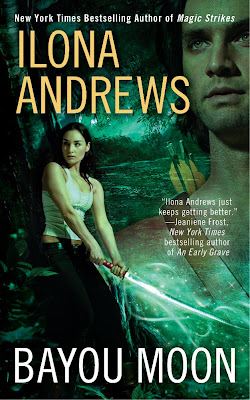 The Edge lies between worlds, on the border between the Broken, where people shop at Walmart and magic is a fairytale–and the Weird, where blueblood aristocrats rule, changelings roam, and the strength of your magic can change your destiny…

Cerise Mar and her unruly clan are cash poor but land rich, claiming a large swathe of the Mire, the Edge swamplands between the state of Louisiana and the Weird. When her parents vanish, her clan’s long-time rivals are suspect number one.

But all is not as it seems. Two nations of the Weird are waging a cold war fought by feint and espionage, and their conflict is about to spill over into the Edge—and Cerise’s life . William, a changeling soldier who left behind the politics of the Weird, has been forced back into service to track down a rival nation’s spymaster.

When William’s and Cerise’s missions lead them to cross paths, sparks fly—but they’ll have to work together if they want to succeed…and survive.

I didn't mention William in my review of On The Edge.  He was a secondary character who became smitten with Rose but Rose remained friends with him, explaining to him that she liked him as a friend and not in that way.  William is an interesting and unusual character.  Declan's erstwhile best friend growing up, he is goes into self-imposed exile living in The Edge at the end of On the Edge. Okay, it's difficult here trying to explain how complex William is, how different his point of view is, without giving his story away.  Let's just keep it at that.  He is very different to what I've encountered as a main character in the past.  He probably is the most dangerous main character I've ever encountered, but it made me love him all the more for it.  His self-imposed exile comes to an end when The Mirror, a secret intelligence organisation, recruits him to help track down someone whom he despises, Spider.  An agent working for the Dukedom of Louisiana's spy agency called The Hand.

Bayou Moon leads us further into the world created in OTE.  We are made more aware of the politics and how it affects various people living in The Edge but also in The Weird.  We get to see some of the spy networks that are put in place to help keep peace on one hand, but also help gain the upper hand in the struggle between the different nations in The Weird.

Cerise Mar is a great creation.  Family comes first, but she's young and she struggles to make ends meet.  The family is huge and each day is a battle to feed them and clothe them all.  But she has no choice, she has to fulfil the role of head of the family because through the machinations of a rival family, her parents have gone missing.

Cerise and William reluctantly start working together and it's interesting to see how William moves on from obsessing over Rose and sees a wider world in which Cerise becomes the person who holds him to her side and keeps him from tipping over the edge, into wildness.  There is a lot of fun banter between William and Cerise and it is obvious they are hugely attracted to each other. Again, when the sexytimes does happen, it is rich, sexy, potent, but does not go one for twenty pages.  I approve of this.

Like OTE, Bayou Moon is a standalone title set within the same world - and each consecutive title looks like it is set to be the same way.  From Bayou Moon we move to Fate's Edge, the third title in the series as it stands at the moment. 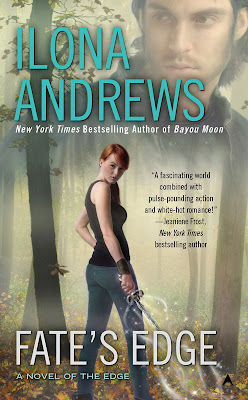 Born to a family of conmen, Audrey Callahan left behind her life in the Edge for an unmagical existence in the Broken. Audrey is determined to stay on the straight and narrow, but when her brother gets into hot water, the former thief takes on one last heist and finds herself matching wits with a jack of all trades.


Kaldar Mar is a gambler, a lawyer, a thief, and a spy with some unusual talents that guarantee him lucrative work. When his latest assignment has him tracking down a stolen item, Kaldar doesn’t expect much of a challenge—until Audrey turns up to give him a run for his money.


But when the missing item falls into the hands of a lethal criminal, Kaldar realizes that in order to finish the job and survive, he’s going to need Audrey’s help…

Kaldar is probably one of my favourite characters in The Edge series thus far.  He's complex, charming, funny and impossibly hot.  We meet him in the previous Edge title, Bayou Moon and he is one of Cerise's cousins.

When we meet Audrey she's being offered a real job in the Broken.  She's ecstatic.  She's made it - a real life in the real world, which will mean real money and respectability.  But that is quickly taken from her when she's basically blackmailed into stealing something to help keep her brother safe.  Intricately written, Audrey is the bad girl trying to do right, with the pressures of family steering her wrong.  Rarely have I so taken to a main character.  Audrey is superbly rendered and she is very much Kaldar's match.


***
I don't really know what else to say.  The writing is superb, the characters are great.  Writing these reviews reminded me how great these titles are and how much I love the books and how much I wish I could un-read them so that I can experience them for the first time again.

Each of the books has its merits and in my opinion, very few flaws.  Incredibly strong world-building, as Kaz mentioned, but also great characters and a cast of rich secondary characters that run the gamut of ordinary to extraordinary and therefore very memorable.  This series really does deserve all the plaudits it can get.  The stories are fun, layered and involved.  With each title you fall for the two main characters and you wish they would get together.  And although they do, it's written in such a way that you know their lives won't be quiet and mundane.  I cannot wait for more in this series and although I realise it takes time for great books to be written, I wish all speed to Ilona and Gordon's fingers, so I can have my Edge fix.

Find Ilona Andrews' site here.    And in the meantime, I'll pick up the Kate Daniels books to devour.
Who wrote this? Liz at 8:20 am