The Killables by Gemma Malley 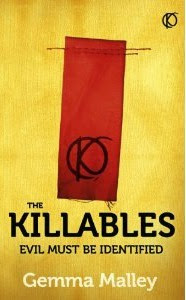 Synopsis
Everyone accepted that people were different physically. But inside? Inside, they were different too. You just had to know how to tell, what to look for.

Evil has been eradicated. The City has been established. And citizens may only enter after having the 'evil' part of their brain removed. They are labelled on the System according to how 'good' they are. If they show signs of the evil emerging, they are labelled a K . . . But no one knows quite what that means. Only that they disappear, never to be seen again . . .
Fresh from seeing The Hunger Games on the weekend I was ready to read a new dystopian series and was over the moon to have a copy of this. However, I was ready for a different slant on the pattern that we've seen in some books of late. I did find that in The Killables. We meet Evie and even at the start she's already having doubts about the system. She has bad dreams, bad thoughts, questions when she knows she should be calm, accepting and obedient. I didn't like Evie's mother at the beginning but when she called in the Brother to discuss Evie's dreams I really started to hate her. Then we meet her intended future husband Lucas who's both beautiful but cold. Her work environment in the government buildings is equally difficult and so we start to get an idea of what life is like for Evie.
What I found interesting about The Killables is the differences. I've got used to dystopians being a bit of a slow burn. We see how society runs and the main character initially is quite happy, or doesn't really want to leave the stability and normality that they've become used to. Then, gradually, they start to question things, or are manipulated by the system. Normally the crisis is at the end, the resolution of the massive build up. With The Killables, Evie is already acting out and is at a point of crisis from the beginning. I found this refreshing and it made the book fly along. A great deal of thought and planning has clearly gone into the world building. I believed it, could see it happening and found it disturbing and fascinating at the same time.
The only thing, or rather character, that I didn't like was Raffy. He's the brother of Lucas, Evie's intended. Where Lucas is a robot of the system, emotionless and ever-obidient - Raffy is the rebel. If it wasn't for Lucas's guidance everyone believes that Raffy would have been made a K class - a Killable. While I'm all for the quiet yet brooding types and I loved him initially, later on I couldn't see what Evie saw in him. However, I'm not the one going through the upheaval of a nightmare regime so I suppose she could well cling to what she knows. I'm very interested to see how she develops and what decisions she makes in later books.
The denouement was particularly satisfying. The System is organised on a computer and I loved the part that this took in the plot and its ending. Although this is the first in the series I was happy with the conclusion of book one, it satisfied my need for revenge although there are plenty of untied ends and interesting threads for the rest of the series.
Who wrote this? Essjay at 7:30 am

Email ThisBlogThis!Share to TwitterShare to FacebookShare to Pinterest
Labels: gemma malley, hodder and stoughton, the killables

Sounds good. I am looking forward to this one.

I can't wait to read this one, Ive head very good things about it and the author!