My Visit to the Warner Bros. Studio Tour 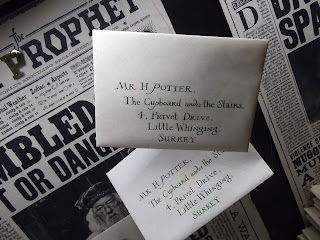 I adore Harry Potter; the books, the world, the films - everything. So when I found out that Levesden Studios which is about twenty minutes from where I live was going to do a tour I was beyond excited. What I imagined in my head was a small exhibit based on the mechanics behind the films. For some reason I thought it would be a bit of a minority, geeky thing that would be interesting for fans of the films but nothing more. I obviously wasn't thinking this though because the Warner Bros. Studio tour is MASSIVE.
If there was ever any doubt how much work has gone in to these amazing films then the tour sweeps them away. First off though I feel I need to point out that this isn't in London. It's near Watford which (for those who don't know) is near London. So if you're planning a day out then make it just that - a day. It'll take about twenty five minutes on a train from Euston to Watford and then the studio has laid on buses which leave Watford Junction every fifteen minutes to the Studio which is a fifteen minute journey. So, it's not an arduous trip but worth knowing.
The foyer has the shop (more of that later) and huge posters of the stars, a cafe and a Starbucks. Once in you can join the queue and you're allowed to enter of groups (of around 150 I think but I could be wrong). You're held in an area for a film but I'm not going to spoil this bit for you. Once into the great hall your visit begins and you're free to look at everything in your own time. I opted for a digital guide which works like any touch screen device. There are numbered stops for you to play the appropriate section but also a whole load of extra material like videos and the such. I need to go back so I can look at every single section on the guide, it's only £4.50 and well worth the money.
Once through the great hall I was in Harry Potter heaven. There's everything from gorgeous costumes and wigs, props, jaw-dropping sets, paintings and more. I could quite happily have spent about four hours looking at everything. The sheer amount of books blew me away. I was just loving seeing the ones that we've become used to from the films. Just look at this brown leather copy of Do It Yourself Broom Care. Comics were made to put in the common room, invitations for the Yule Ball - honestly, I was amazed at the sheer number of printed matter created. 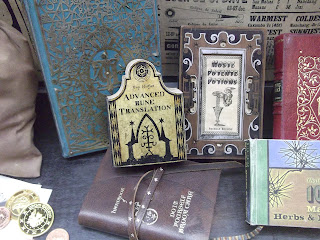 So, from the little things to the sets. These things are massive. The Mirror of Erised and the Magic is Might statue - huge. The gates to Hogwarts are about 15 foot high and made of stone. Don't get me wrong, a lot of things are made of wood or plaster but it seemed to me that equal amounts of things have been crafted the old-fashioned way. Look at these: - 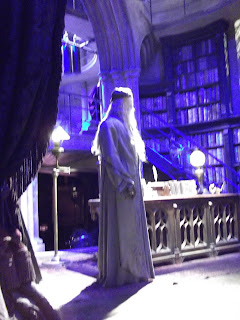 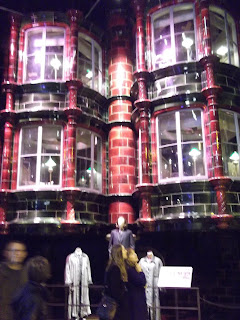 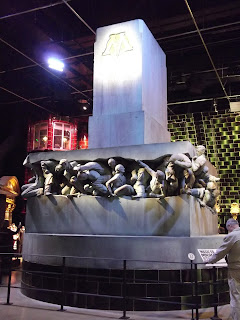 Add to this all the costumes which are beautifully displayed and placed next to the relevant sets. The dress that Hermione wears to the Yule Ball? Gorgeous in real life. The wigs? Stunning - the Dumbledore one is ridiculously long. For continuity they show five virtually identical outfits that Daniel Radcliffe wore, each one labelled with things like, "more dust." I was aware that all of these things went on but to see it all laid out is impressive.
One of the last things you see is Diagon Alley. I was speechless. Apart from a bit of green screen behind Gringotts you're basically in the street. There are cobbles on the floor, it's just … I'm really struggling for words here but I was smiling whilst my heart was being wrung out. I'm so used to seeing the world on the films and Diagon Alley was just so perfect that I couldn't have asked for more. Right, I'll shut up now but here's another piccy. 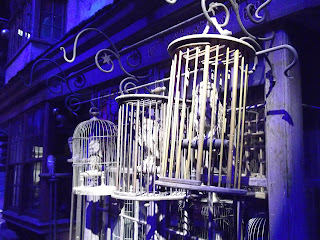 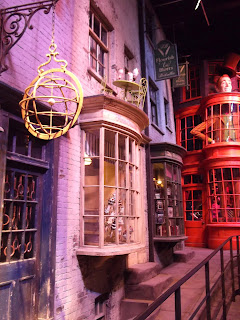 I have missed out some really wonderful exhibits but I wanted to give you a flavour of what you'll see if you visited. The artwork, model workshop and outside sets are fascinating too. Then there's the model of Hogwarts. Basically, I took nearly two hundred photos so I don't want to overload you! You leave via the shop where I bought a wand, a pygmy puff (which I immediately had to hide from my dog when I got home) and other stuff. There's a couple of gorgeous stained windows in the shop. Remember the one that got a close up in the Goblet of Fire? Where the rain runs over a face like a tear? It's there behind one of the tills. Books are piled up on library shelves - it's a nice touch to end the tour with. To sum up - I drank butter beer, I stood on the Night Bus and I was in Harry Potter heaven. Go, if you're even a mild fan of the films - just go. You won't regret it.
Who wrote this? Essjay at 7:30 am

Thanks so much for sharing this. I've been debating if it's worth it--sounds like it very much is! Were the crowds bad?

Not at all, I could get right up to the front to see everything. It was quite chilled out and easy to get round.

Oooh, I'm SO jealous! It looks amazing, thanks for posting :)

It all sounds so good. We're booked to go in July, I can't wait!

It looks fantastic - I think my girls would love it