The Ghost of Crutchfield Hall by Mary Downing Hahn 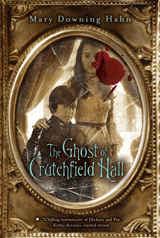 Twelve-year-old orphan Florence looks forward to a new life with her great-uncle and great-aunt at Crutchfield Hall, an old manor house in the English countryside. But she doesn’t expect the ghost of her cousin Sophia, who haunts the cavernous rooms and dimly lit hallways of Crutchfield and concocts a plan to use Florence to help her achieve her murderous goals. Will Florence be able to convince the others in the household of the imminent danger and stop Sophia before it’s too late?

I bought this book as an impulse purchase whilst at Foyles the other month. It looked intriguing but was seriously tiny for the price - just one hundred and fifty pages. But that sort of thing never stopped The Woman in Black so I took the plunge. Florence is a sweet little thing, more used to rough treatment at the orphanage where she has spent the last seven years being freezing and half-starved. The Gothic overtones are present from the beginning; lonely girl on a coach, the windswept countryside, the sinister aunt, the huge and overbearing house. I totally lapped all this up. Reading on the train on my way home I was completely on Florence's side as she investigates her Uncle's study only to break a picture frame and drip blood onto the likeness of Sophia (who has died). In trouble again and seeking solace with the servants Sophia finds that something, or someone, is following her.

Sophia soon makes herself known to Florence and begins to twist her to her will. Poor Florence is also being bullied by the awful aunt who worshipped Sophia. As time progresses Florence realises that both she and the rest of the household are in real danger and sets about trying to stop Sophia's plans. The action is fast moving and always exciting. I did feel though that, although I bought this from the young adult section it would probably suit a confident (and not easily scared) younger reader.

This book is gripping. The spookiness builds and when I heard a knocking behind me on the train I jumped and spent a couple of minutes trying to work out where the noise had come from. A quick read, I finished it that night at quarter to twelve. I put the book under my bed and switched off the light. The ending was eerie enough for me to consider moving the book further away, as if keeping it beneath me would bring something out in the dark. I'll definitely be seeking out more books by this author.
Who wrote this? Essjay at 7:30 am

I love the sound of this.

You simply MUST read Wait Till Helen Comes by her - it was one of the very few children's books I actually read when I was a child, and it scared the hell out of me. Still does, really. XD

Thanks for the recommendation. It's on my wish list! Thank you :-D