Born at Midnight by CC Hunter 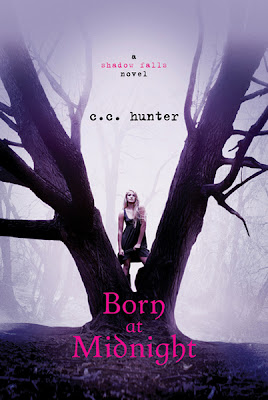 Kylie Galen has had a lot of crap tossed in her lap lately. Her parents are getting a divorce for who the heck knows why. Her boyfriend broke up with her because she wouldn't put out. And her grandmother died because . . . well, older people do that. But now, Kylie's acquired a stalker and she hasn't a clue what he wants or how to get rid of him . . . and she really wants to get rid of him because apparently she's the only one who sees him. Thinking she may be losing it, her parents send her off to see a psychologist who gets Kylie sent to Shadow Falls Camp. Kylie and her parents think it's a camp for troubled teens.


Kylie's surrounded by vampires, werewolves, fairies, witches and shapeshifters. And if she believes what they tell her, she's one of them. They're just not sure exactly how she fits in. As Kylie struggles to cope with the realization that these creatures even exist, and the fact that she might not be human, she's got two hot guys, a werewolf and a half-fairy vying for her attention. And they can just keep vying. Kylie's determined that before she lets her heart loose on love, she needs to unearth the truth. What does the ghost want? Who can and can't she trust? And most of all . . . What is she?

I honestly rolled my eyes when I read the above synopsis.  But then Neil from Foyles slapped me hard and pressed the book in my hands and said: read it, you opinionated cow.  And so I did.  In one sitting.

Well written, well plotted, Ms. Hunter has given us a Camp Halfblood for more mature readers.  it could so easily have fallen by the wayside and been "another school populated by supernatural creatures" but what rescues Born at Midnight from the doldrums is the main character, Kylie.  She is a cool heroine, a girl I'd like to be mates with, someone I can identify with.  She's desperately doing her best to fit in but things just aren't working out for her.

When she's sent to this camp for summer she is more than just a bit rebellious but is soon set straight by the camp managers who waste no time telling her what's what.  And the biggest mystery is that no one is quite sure what Kylie is.  There are all manner of creatures at the camp, yet no one is able to detect what sort of creature Kylie is. This makes for great dramatic inner conflict and as Kylie sets out trying to figure this out, she has to cope with a vampiric room mate and a witchy one too.  The three girls couldn't be more different yet because of their differences, they eventually bond...tentatively.

I love that Kylie's quest to figure out who she is, to get to the truth of it, isn't the only strand to the story.  There is a mystery with regards to the adjoining nature reserve and it's woven very neatly into the overall storyline of Born at Midnight.  Good, strong, intelligent and clever writing.  I approve.

I liked that there was shouting and angst and stress. The characters felt real, what they get up to was genuine and their decisions they made were stupid and totally real.  It just felt honest and real, even though the characters were wholly or partly supernatural.  As for the two love interests - wow.  Hot! I genuinely cannot decide who I prefer so will be a fence-sitter on this one.  Sorry.

I found myself visiting Ms. Hunter's website and am SO pleased that there are more to this series as I genuinely and looking forward to reading them.  Awake at Dawn looks like it's being released towards October this year.  Perfect.
Who wrote this? Liz at 8:23 am

Oooh so I should read this then.I loved that Neil slapped it into your hand.

Okay your review has convinced me on this (that synopsis most definitely didn't). I'll give it a go.

Huh, I'd pretty much written this one off as well but your review made me stop and reconsider! :)