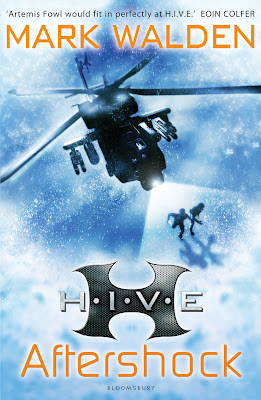 I always like the bad guys - in movies and in books.  When Bloomsbury offered us the Mark Walden blog tour for the new release of his novel: Aftershock, as part of the HIVE series of books, and they told me he wanted to write us an article about the badass Darth Vader, we were smitten. Yes, we are that easy. 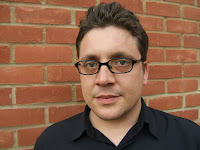 
It's 1977, I'm in a cinema. It's such a long time ago that people on one side of the cinema are allowed to smoke while watching the film. We're talking ancient history here folks. I've just watched these giant yellow letters scrolling up the screen and then a spaceship flies over my head being chased by another giant triangular space ship. To my five year old brain this is immediate sensory overload. Up to this point my idea of special effects was Tom Baker running down a wobbly corridor being chased by a monster that was clearly made from the contents of the bin behind the studio. I'm fairly sure my mouth was already hanging open in awe at that point but, little did I know that the best was yet to come.

I watched enthralled as a group of frightened looking soldiers with laser guns took up positions in a bright white corridor, levelling their weapons at the door at the far end of the passage. What could they possibly be so scared of, I wondered to myself. They had laser guns for goodness sake, (yes I know they're called blasters but at that point they were just laser guns) what could possibly worry someone with a laser gun? I had no idea at the time that I was about to get my answer.

The door exploded in a magnesium-bright flash and men, possibly robots, my five year old brain told me, in gleaming white armour burst through the door blasters blasting. It's quite possible at this point that my mouth was hanging so far open that my jaw had actually dislocated. There may even have been drool.

Anyway, the frightened soldiers fell before this swarm of men/robots with their skull-faced helmets, clearing the way for what had to rate as one of the greatest entrances in cinematic history. The smoke cleared and a figure emerged. Clad in gleaming black armour, his cloak billowing behind him, like some kind of cross between a robot, a samurai and a space-ninja.

The name says it all really. He's become such an icon of villainy since that we almost take him for granted but, for five year old me, he was and still is, the greatest villain ever. You can keep your sparkling vampires, give me a force-choking, Kenobi slicing, bit of Vader action any day of the week. Few characters have become so globally infamous and so instantly recognised and that's because there's more to Vader than just your standard moustache-twirling villain. He's a tragic figure, the fallen hero who will ultimately find redemption and return to the light but there's going to be some proper text book bad guy behaviour before we get there.

Some might argue that there are better villains but, my five year old self and my thirty eight year old self for that matter have only one thing to say to those doubters.


Competition Time:
We have 3 sets of the entire series to be won, along with a t-shirt, rucksack and wristbands.  The rules are:

My evil spy name would be ......Destroyicon!
- Eliot Smith - elitosmithgt@yahoo.co.uk

Evil spy name now that is a hard question for a Book Angel eeekkkk but the soon to be ex does tell me I should be called Evil Bitch instead *giggles* does that count ;D

In the underground world of espionage and destruction I am the one known only as el Chiuaua de la Muerte - for reasons that you should pray to whatever deities you hold sacred you never discover!

You will never find me but should you choose my nombre I shall contact you!

My evil spy name would be The Scourge.

My evil spy name would be the Indestructable

If I became an evil spy I would love to call myself talyon the mighty!!